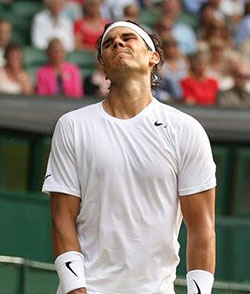 RAFAEL Nadal’s charge towards a third Wimbledon title came to a juddering halt in the fourth round when he was sensationally beaten by 19-year-old Australian wildcard Nick Kyrgios 7-6 (5) 5-7 7-6 (5) 6-3.
Ranked 144th in the world, Kyrgios fired down 37 aces and played a fearless brand of tennis to topple the world number one following two hours 58 minutes of exhilarating action.
It was the first time since 1992 a man ranked outside the top 100 had beaten a world number one.
“It hasn’t sunk in at all what just played out there. I played some extraordinary tennis,” said Kyrgios who is enjoying a remarkable run at these championships having served nine match points in his third-round win over Richard Gasquet.
“You’ve got to believe that you can win the match from the start and I definitely thought that. I am playing some unbelievable tennis on the grass,” he told reporters. “My mind’s buzzing … I’m just going to enjoy this.”
Kyrgios certainly had the crowd buzzing after causing the biggest shock of this year’s men’s tournament by bringing the 2008 and 2010 champion to his knees.
He opened with an ace, won the first set with an ace and sealed victory with an ace.

While Nadal might have been fed up with the number of thunderbolts that whistled past his ears, those lucky to watch the Australian tyro come of age will know that he is not simply an ace machine.
After dropping only four points on serve in the first set, Kyrgios had 15,000 fans leaping to their feet as he followed up jaw-dropping crosscourt sizzlers with breath-taking down-the-line winners.
As if that was not enough, he irked Nadal by producing perhaps the shot of the tournament.
Dangling his racket between his legs, Kyrgios timed the ball perfectly and astonishingly it kissed the tape and fell in.
The teenager loved it, the crowd loved it, Nadal hated it.
The 14-times grand slam champion’s day was unravelling fast and despite winning the second set he was left gasping as Kyrgios kept on believing that he could make his debut outing on Wimbledon’s Centre Court a day to remember.
A forehand error gave Kyrgios a break for a 3-1 lead in the fourth set and from then on the Spaniard was left chasing shadows and at 7.09pm local time, his hopes of a third Wimbledon crown had been snuffed out.Advertisement

While one champion was exiting stage left, John McEnroe was hailing the arrival of a man he thinks can go all the way.
“We’ve been waiting for this for a while. We keep saying ‘who is the next guy?’, and I think we’ve found that guy right now,” said the former three-times champion.
“That was absolutely stunning, to see what he did to the world number one today. How did he keep that up? He absolutely believed that he was going to win that match.
“He’s acting to me like he could win this tournament. The last guy I saw like this was Boris Becker – young teenager, no fear whatsoever,” added the American great.
Former world junior number one Kyrgios, competing at his first Wimbledon, next plays Canadian eighth seed Milos Raonic for a place in the semi-finals.