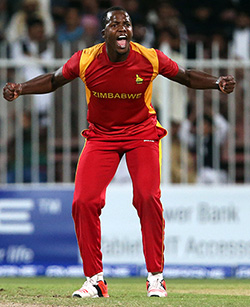 GULBADIN Naib was Afghanistan’s hero as they clinched the one-day series with Zimbabwe, prevailing by two wickets with two balls to spare in a thrilling climax to the fifth ODI.
The two sides came into Wednesday’s encounter in Sharjah with the series locked at 2-2, and Zimbabwe looked in a strong position after they posted a competitive 248 all out, with Hamilton Masakadza’s 110 providing the backbone.
Afghanistan made a steady start to their reply but wickets fell at regular intervals to put Zimbabwe in the driving seat, however a late flourish from Naib – who struck 82 not out – secured victory for the designated hosts.
Needing 10 to win off the final over, Naib won it in style with a huge six off his pads, the ball sailing over the backward square leg boundary to the jubilation of Afghanistan’s players.
Zimbabwe recovered from the early loss of Chamu Chibhabha (1) as Peter Moor (42) and Masakadza enjoyed a 101-run partnership for the second wicket.
With 15 overs to go Afghanistan began to make inroads into the Zimbabwe batting line-up with Amir Hamza (3-41), Rashid Khan (2-59) and Mohammad Nabi (2-23) all enjoying success as Masakadza slowly ran out of partners.
His fourth ODI century ensured they posted a competitive total, but Afghanistan’s consistency throughout the order proved decisive.
Contributions from Mohammad Shahzad (25), Noor Ali Zadran (30) and Hashmatullah Shahidi (32) helped set the platform for Naib to be the match-winner, a role he revelled in.
He struck six sixes and three fours in his 68-ball innings, holding his nerve at the end to secure a second successive series win over Zimbabwe and see Afghanistan climb into the top 10 of the ICC ODI rankings.Advertisement