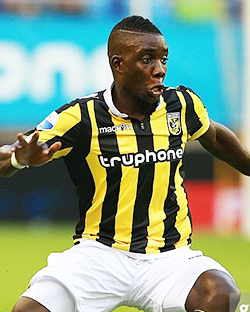 ZIMBABWE international midfielder Marvelous Nakamba scored his first goal for Vitesse in his side’s away 2-2 draw against De Graafschap.
According to reports from Netherlands, Nakamba opened the scoring with a marvellous shot from outside the box which left neutrals nodding in acknowledgement of a great piece of technique.
It was the Zimbabwean’s first league goal in 30 appearances for Vitesse.
The 22-year-old former Bantu Rovers player’s stock is rising in Netherlands. After just eight league appearances last season, he has started in 22 of his team’s 24 matches this season.
This comes as the Warriors are ready to resume their 2017 African Cup of Nations campaign.
Warriors coach, Kalisto Pasuwa will naturally be pleased to see some of the players performing consistently well for their teams.
Zimbabwe, currently tied top of Group L with Swaziland on four points after two rounds of matches, will conclude their qualifiers with a tough trip away to Guinea on September 2.
Pasuwa is expected to name his squad for the matches early next month, with a number of players making their cases to be included in the squad.
Striker Knowledge Musona is also in irresistible form in the Belgian Pro League and scored his 11th goal of the season for KV Oostende in a 5-2 home win over champions Gent on Saturday.
The 25-year-old scored the third goal for his team in the 36th minute after Gent had taken a seventh minute lead before the home side’s fight back in the seven-goal thriller.
Also in impressive form is Czech Republic-based defender, Costa Nhamoinesu.
After being named the man of the match in his side Sparta Praha’s 1-0 win over Krasnodar in the Uefa Europa league last Thursday, he was back again in the headlines three days later when he scored the cushion goal in the 2-0 league win over third-placed Mladá Boleslav.
It was the 30-year-old’s second goal of the campaign for Praha who are second on the log standings, three points behind champions Viktoria Plzeň.

Making the headlines in the Czech Republic …  Costa Nhamoinesu