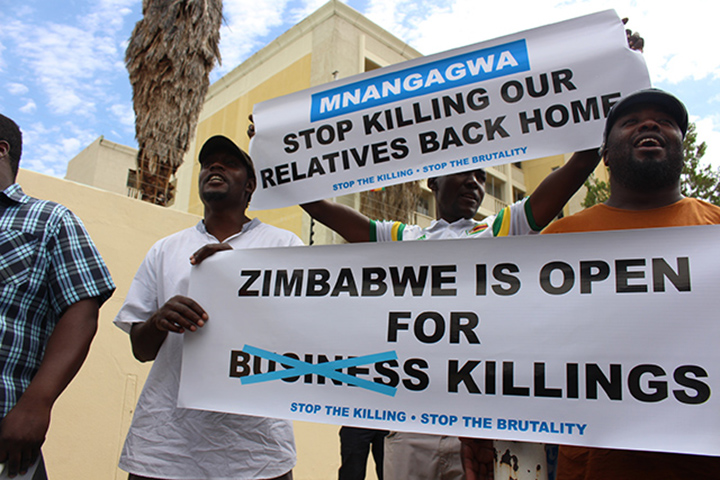 IT was under sad circumstances that Mandume Ndemufayo Avenue in Windhoek was last Friday painted green, red and yellow, when a group of about 60 Zimbabweans took to the streets to protest against the continued plight of their compatriots back in Zimbabwe.

A petition, under the theme ‘Zimbabwe is Bur-ning’ read outside the Zimbabwe embassy in Windhoek, by one of of the organisers, Tapiwa Mugore, outlined issues ranging from the unconstitutional suppression of individual human rights, poor healthcare delivery, a 250% fuel increase, switching off of the internet and social media platforms as well as the deepening economic crisis.

In addition, the protestors who marched from Wernhil Park to the Zimbabwe embassy condemned the government’s use of live ammunition on unarmed, lawfully protesting civilians.

Amongst other demands, the protestors asked that the Zimbabwe embassy convey to Mnangagwa the need for him to return home–from the 2019 World Economic Forum – to respond to the people’s plight and have negotiating dialogue with opposition parties to resolve the legitimacy crisis of the 30 July 2018 elections.

“This crisis is hampering international engagement and any efforts to rebuild the country,” the petition stated.

As solutions, the protes-ters advised that the government; demonetise the bond note and do away with the fictitious rate of 1:1 with the US dollar, review salaries of civil servants [including that of embassy staff in Namibia] and to address the monetary challenges by joining the Rand Monitory Union – with the intended goal of amending the current liquidity problems and other economic woes.

Ashwyn Mberi, a Zimbabwean poet living in Namibia said that the protest was an opportunity for president Hage Geingob, who is the SADC chairperson, to speak for the majority.

Mberi added that this was an opportunity for Geingob to say something and intervene in what’s happening in Zimbabwe, as history will remember this moment.

Environmentalist and advocate for women and gender equality, Faith Chambara, said that she attended the march in order to represent the women and children who have been affected by violence in her country.

“The situation back home is quite tense at the moment and it’s our constitutional right as the people of Zimbabwe to be able to protest,” Chambara said.

She urged the Zimbabwean army to refrain from using force on women and children, as they are the future of the country.

“They are the ones who help build the economy of our nation,” she said.

Anesu Mwape, a Zimbabwean national studying at Unam said that the whole event has left her helpless and emotionally and mentally exhausted.

“The process is hopeless because we felt that things might start looking up after the elections but it seems that things are just going to become worse.”

Steven Ndlovu, who left Zimbabwe in 2014 and works as a constructer, said he was not happy about what was happening “at home.”

Another organiser of Friday’s protest, Elisha Chambara revealed to The Namibian that three representatives headed to the South African embassy to hand over the petition, whilst a second copy would be submitted at the Office of the Prime Minister for the attention of Geingob as SADC chairperson.

“We are expecting feedback as soon as possible. We are going to do a follow-up, I think we’ll give them a day to digest and then we’ll come back here,” Chambara urged, following what he described as bad treatment from the Zimbabwe embassy.

Mnangagwa rose to power following a coup which resulted in the ousting of former president Mugabe who had ruled Zimbabwe for 37 years post-independence.

He officially became Zimbabwe’s second president after controversially winning 50,8% of the vote, while Nelson Chamisa of the opposition MDC party attained 44,3%, in the 2018 elections.