EMBATTLED Health Minister Obadiah Moyo is back in the limelight for all the wrong reasons after Namibian authorities have dismissed recent claims by the government official the neighbouring country donated 4 449 rapid result test kits to Zimbabwe.

Moyo, as health minister had reportedly briefed cabinet about the none-existent donation.

Vice President Kembo Mohadi in April also confirmed that the country had received a donation of test kits from its SADC neighbour.

But in a statement, Executive Director for Namibian Embassy in Zimbabwe, Salma Ashipala-Musavyi said they sought clarity from his country’s Foreign Affairs Ministry after several tendentious media reports over the donation.

“In a formal response, the Ministry of Foreign Affairs and International Trade of the Republic of Zimbabwe informed that the allegations of the alleged donation of 4 499 testing kits from Namibia to Zimbabwe were unfounded, erroneous and apologised for the inconveniences the reports might have caused. 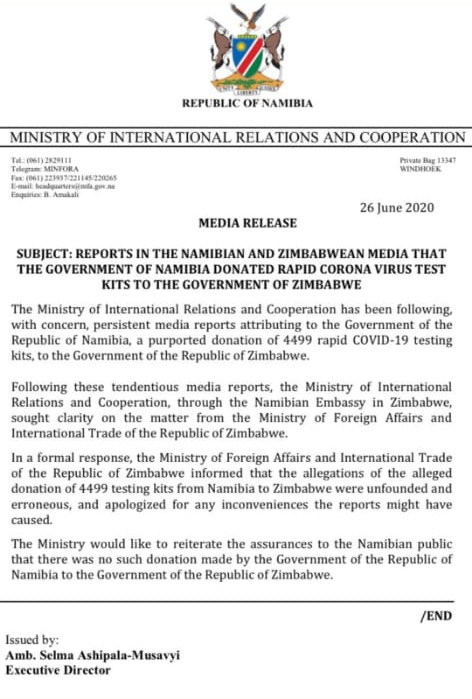