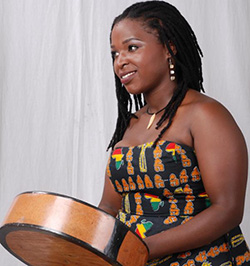 NANDI Queen was born Marjorie Tairima in 1986 in Harare; the second born in a family of four. Nandi attended school in Harare where her family lives. She started playing the Mbira about 6 years ago; since then, the talented 31-year-old has never looked back.
The sky is the limit for the enthusiast turned genius of the thumb piano who is now one of the most talented rising female Mbira music stars in Zimbabwe.
Those who have watched her on stage say Nandi’s music is energetic, soulful and evocative. More importantly, her music transcends all the ages and generations of traditional music lovers.
Nandi’s acoustic and aesthetic abilities are conspicuous in the way she sings and plays the Mbira instrument.
Her most avid fans believe it’s a matter of time before this talented and self-taught Mbira musician becomes a master of the instrument herself.
Nandi’s dream is to become a big name in the music fraternity and Mbira is her music of choice. She was inspired by the legendary Mbuya Stella Chiweshe and the late Chiwoniso Mararire.
Like Chiwoniso, Nandi is known for mixing elements of hip hop with traditional Shona music when playing Mbira to make it appeal to younger audiences.
Nandi continues to dispel the misconception that playing Mbira music is associated with traditional Shona customs and values related to the medium spirits (Zvevadzimu).
Notably, Nandi is one of the very few musicians who can play Mbira music in the Ndebele/Zulu languages; Mbira music is largely associated with the Shona language.
Her ambition is to break the glass ceiling and become one of Africa’s greatest female mbira players/musicians. Over a few years, Nandi has developed a strong attachment to and love for mbira music and has devoted her life to playing with and living Mbira music.
Interview with Crisford Chogugudza: