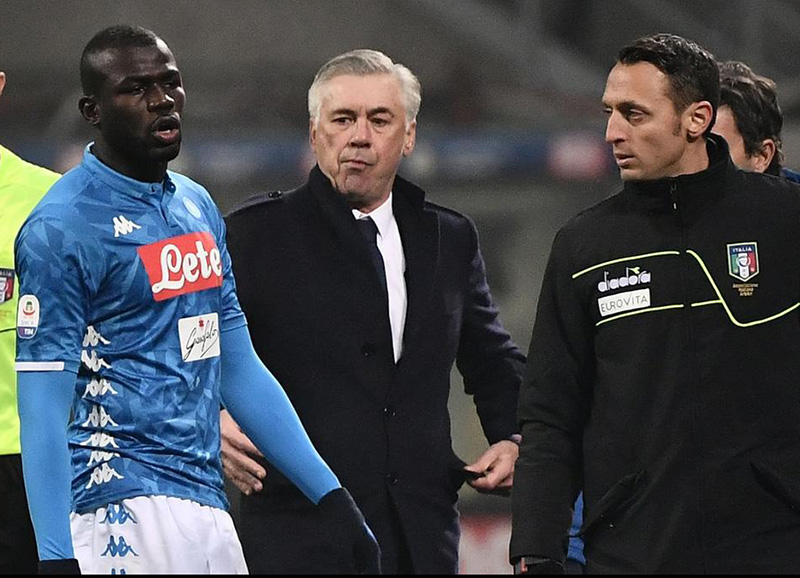 Koulibaly was sent off 10 minutes from the end of Napoli’s 1-0 defeat at the San Siro, with substitute Lautaro Martinez scoring a stoppage-time winner for Inter.

Centre-back Koulibaly was initially booked for a foul on Matteo Politano and then shown another yellow card in the aftermath for sarcastically applauding the referee.

The 27-year-old had been subjected to monkey noises from home supporters throughout the match.

“We asked three times for the match to be suspended and there were three announcements, but the match continued,” Ancelotti told Sky.

“The player was irritable, he wasn’t in the best state of mind. Usually he’s a very calm and professional player but there were these noises throughout the game.”

“It looks like an excuse but the player was agitated and irritable. It’s not good, not for us, nor for Italian football,” he added.

“The solution exists. You have to stop the match. You just have to know when, after how many announcements. And if we don’t know, then next time we may have to stop play ourselves.”

Koulibaly apologised on Twitter for the defeat and being sent off but said: “I am proud of the colour of my skin. (Proud) to be French, Senegalese, Neapolitan: a man”.