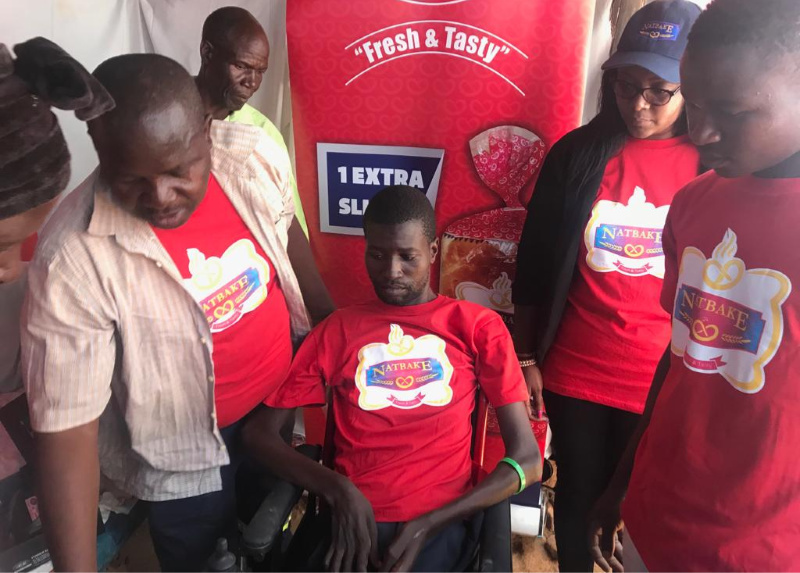 LOCAL bakery, Natbake has donated over $200 000 worth of goods and further cleared a debt of US$1 000 owed by Patrick Sibanda, a quadriplegic who has been appealing for help since he had a tragic road accident in 2010.

Sibanda, a resident of Harare’s Rugare suburb, got bedridden when the road accident he suffered at the age of 24 broke his spinal code.

He was the breadwinner for his family and had bought his mother a house which was later pledged as collateral security when he took a loan to service his medical bills.

At a donation ceremony in Rugare Tuesday, Natbake General Manager Annie Nhongo said the company has taken it upon itself to meet the outstanding bill payment and recover the title deeds for the house.

“You may also be aware that Mr. Sibanda lost his house’s title deeds to some debt collectors after he had failed to service a loan he got for his medical bills and as Natbake, we managed to pay US$1 000 which the debt collectors wanted for them to release the title deeds which we are going to handover to Mr Sibanda.

“We also believe in giving man the hook so that he catches his own fish and in that spirit, we did build him a tuckshop and we are going to stock it with products like mealie meal and flour so that he finds something to sustain himself,” she said.

Evangelista Mugore, mother to Sibanda added; “I want to thank you Zimbabweans for your help. We received money through Ecocash from different citizens.

“I also want to thank Natbake for its assistance. The situation had gotten so tough to a point my son contemplated suicide when he felt he was burdening me through his physical condition but now because of your love, we are here today. I am grateful.”

GMAZ also bought Sibanda an electrically powered state-of-the-art wheelchair which he can operate with less or no assistance, a hospital designed bed, blankets and diapers.

The quadriplegic’s mother has turned has two caregivers who are paid from the rentals that they get from tenants.

He is still appealing for help to get physiotherapy and checked his spinal code.