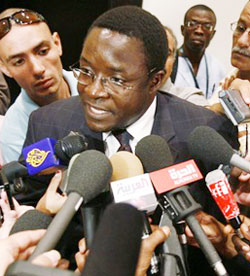 IN recent days certain bold but infantile statements have been made that have caused some of us to reflect seriously on the problem of political silliness and historical idiocy in Zimbabwe.
On the subject of idiots as an intellectual and political challenge, Slovenian philosopher, Slavoj Zizek provided two defining categories.
The first category of an idiot is defined by the arrogant and at the same time ignorant individual who runs into a battlefield between warring soldiers and shouts at one side, “stop shooting, there are people on the other side.” This idiot is idiotically oblivious of the nature of war and the context of deadly fire battle, but arrogates to himself the power to instruct and command one side of the war.
The second idiot, on the pathetic side of things, is the innocent and incorrigibly confident one that when asked by someone in small talk, “how is your day?” he goes on a pulsating and detailed description of the events of his day and his life. Though innocent, the second category of the idiot can be a nauseating reality when there is very serious business to attend to.
In the present article, I have reasons that I will advance below, to believe that Nathaniel Manheru, a paid cleaner of Mugabe’s mess, is a clinical idiot who collapses in himself the two types of idiots defined above. I have no intention to hang Manheru out to dry, but my intention is to alert most of us in the intellectual and political community to the convincing falsehoods and persuasive nonsense that Manheru recently circulated in the media ( http://www.herald.co.zw/southern-zimbabwe-ending-an-overdue-myth/) and the general public sphere.
There is no doubting that many of us out there consider Nathaniel Manheru a diehard opponent of imperialism and fighter against all manner of forces colonial and oppressive.
I write here to observe that Manheru is an educated but uninformed colonised and colonising colonial subject who, while pretending to rebuke imperialism, feeds fat from what Valentin Mudimbe has called “the colonial library.”
This fellow has thrown a lot of textual and verbal mud in the eyes of many a reader and listener, pretending to be a warrior against imperialism and a loyal cadre in Mugabe’s ideological army, in the process concealing rather than revealing the important truth that he desperately needs firm hand-holding when it comes to understanding how the world works.Advertisement