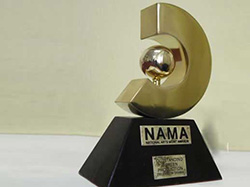 THE National Arts Council Of Zimbabwe (NACZ) has called on artists to submit entries for the 15th edition of the National Merit Awards (NAMA).
“National Arts Council of Zimbabwe (NACZ) urges all production houses, studios, stables, galleries, organisations, associations, groups, artistes, monitors and/or the publics that have outstanding published work of art but have not yet submitted them for National Arts Merit Awards (NAMA) to submit to NACZ offices in Mount Pleasant or Provincial offices,” NACZ marketing and communication officer, Cathrine Mthombeni, said in a statement.
The organisers are yet to announce the venue for the awards which are traditionally held on February.
“The deadline for submission of 15TH NAMA entries is 30th November 2015. Entry forms are obtained from NACZ offices throughout the country, National Gallery of Zimbabwe, registered arts associations and organisations in Zimbabwe,” said Mthombeni.
To ensure transparency, NACZ appointed individual and institutional monitors who have been monitoring the work of excelling artists throughout the year and are still monitoring until November 30.
“The monitors are professional individuals with an in-depth knowledge of the arts as well as arts organizations of repute,” she said.
The monitors include veteran journalist Davison Maruziva, acclaimed poet Chirikure Chirikure, Nehemia Chivandikwa, Brian Geza, Rumbi Katedza, Matthew Takoana, among others.
Institutional monitors include Zimbabwe International Film Festival Trust, Zimbabwe Filmmakers Association, Ibhaisikhopo, Zimbawe International Book Fair, Zimbabwe Women Writers, Zimbabwe Music Rights Association and Zimbabwe Musicians Union, among others.
Mthombeni said the awards are a means of encouraging creativity and excellence in the quality of the arts, making Zimbabwe a force to reckon with on the international arena.
“In addition, the awards aim to inspire artists to strive for higher and original forms of creativity and provide an opportunity for arts disciplines to jointly market and publicize the arts locally, regionally and internationally,” she added.
Consideration of selection will only be given to artist works published from 1st December 2014 to 30th November 2015 and Only Zimbabwean citizens or those with Zimbabwean resident status can enter their work for NAMA.Advertisement

All entries must be accompanied by the artiste’s product(s), these could be in the form of videotapes, cassettes, flash drives, CDs, pictures or books.
“Individuals submitting works for NAMA are encouraged to supply three sets of the particular works/production to assist adjudicators.
“The NAMA disciplines that are adjudicated are dance, film, literary arts, theatre, music, visual arts, media and spoken word,” Mthombeni said.