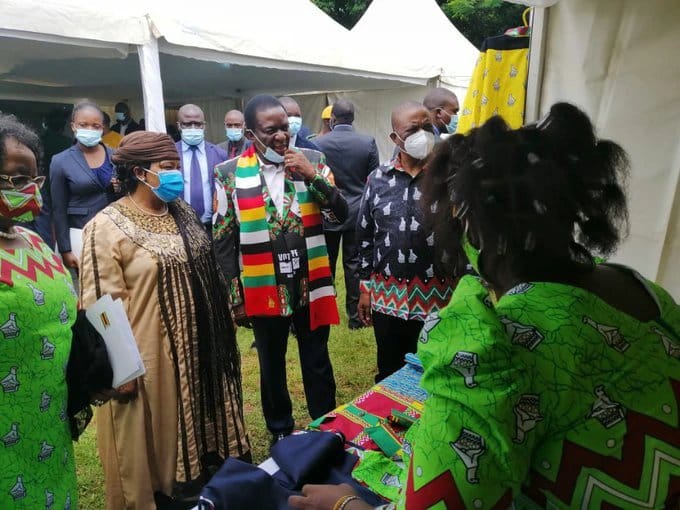 The project was spearheaded by his wife Auxillia Mnangagwa who the president lauded for leading the “milestone achievement that is crucial to promoting and preserving national identity”.

“The fabric plays an important role in the preservation of national values and cultural heritage and helps create unity among our people. I challenge the citizenry to conceptualise our apparel as more than just a form of identity. It must be a bridge, joining communities with the uniqueness of their heritage, more so that this launch is happening two days before our country commemorates Unite Day,” said Mnangagwa.

“I am enthused that fashion and design now plays an equally important role with other artistic fields in our national development discourse. I therefore want to appreciate all the fashion designers and stakeholders in the textile industry for this achievement.

“Going forward, as Zimbabweans, both here and in the Diaspora, let us now promote our country’s sovereignty and national identity through this National Dress Fabric. On our side as Government, we should designate days when our people wear attire with the National Dress Fabric, inclusive of those in the education sector,” he said.

Some cabinet ministers were made to model while decked out in the new dress code at the event.

However, the event was seriously criticised on social media platforms as a misplaced priority at a time when Zimbabwe is grappling with Covid-19 pandemic.

Exiled former cabinet minister Jonathan Moyo queried why Mnangagwa and his wife had attended the event not dressed in national dress.

“Where is the National Dress? Why is Auxillia not wearing it? Auxillia promised a national dress, and her husband, Emmerson showed up dressed in his discredited Zanu PF regalia. Machira chete,” wrote Moyo.