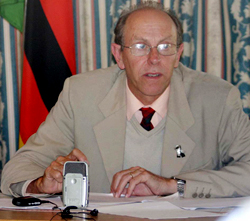 THE month of January 2016 has been, for Southern Africa, wretched in terms of people’s fundamental rights often inappropriately referred to as minority rights. A white woman called Penny Sparrow torched a racial veld fire in South Africa by implicitly calling black people monkeys. The deluge and flood of venomous attacks that followed her remarks were not only anticipated, but also inevitable in that we black Africans respond with rage, given our collective history with slavery, colonialism and racial and ethnic segregation, when racial slurs are tossed at us. No human being wants to be called names, whether justified or not. Modern – day lingua has been modified to be more palatable – that is why the general term ‘physically, emotionally, racially disadvantaged’ has been adopted to take the sting out of pungent labels like ‘disabled’, ‘albino’, ‘mentally retarded’ and ‘blind’.
Ironically, as South Africa licks its wounds from the fall out of Penny Sparrow’s outbursts, we still get pockets of citizens of that country who suffer from xenophobia-related withdrawal symptoms, but that is not the subject of my discussion this week. I am more concerned with how we Zimbabweans apply the so-called minority spectrum and the whole narrative around the issue. More so, I have grown up in a political environment where the inflammable subject of minority rights is usually associated with ‘being white’, ‘being Ndebele’, ‘being Tonga/Venda’, ‘being Moslem’ and so forth.
My tenure as Principal during Zimbabwe’s constitutional research process helped me understand better how so-called minorities view themselves. Zimbabweans did bend over backwards to register their disapproval of ‘minority status’ labels, especially when it came to languages, which was good, because language and skin colour have always been used as a springboard for human rights abuse. In the month that the Americans and the world remember the crucial Martin Luther King fight against racial segregation, we Zimbabweans also need to refocus on eliminating this ugly scourge from amongst us.
What is my point this week? Whenever the debate about development and political leadership is raised in Zimbabwe, two issues emerge. First, that Matabeleland’s state of underdevelopment and particularly the ‘de-industrialisation of Bulawayo’ is ascribed to that region being occupied by ‘minority’ Ndebeles. Closely linked with this point, number two, is that Ndebeles have either failed or are incapable of assuming national leadership positions. In order to avoid clutter in my arguments, let me deal with the subjects separately.Advertisement

There are many ‘wars’ that have been fought in Africa on the basis of marginalisation. In Nigeria, the pre-dominantly Moslem north is said to be marginalised by southern Christians, more so to do with allocation of oil revenues. The Tutsi/Hutu conflict in Rwanda and Burundi was ascribed to the contest for minority recognition while in Zimbabwe, the Gukurahundi assumed an imagery of discrimination. Many would argue that the state plays a primary role in the allocation of resources and that is why in Zimbabwe it is difficult for the Matabeleland regions to ‘succeed’ because resource allocation is centralised in Harare.
My party, the MDC has argued vehemently for devolution so that each area of the country is able to enjoy some “self -determination” in the determination of its development matrix and priorities and how to apply its control of its natural resources to that development matrix. However, the question which always nags me is what are the other dynamics which affect or impact on this question?  What are the other factors or aspects which determine, for example, the so called de-industrialization of Bulawayo other than of its location in the geography of the country? What is the contribution to this of the psychology of occupation and the apologetic self-hate which engenders collective despair and the competition not to rock the boat or what may be termed the compliance beauty contest?
It is true that both micro and macroeconomic policy can shape a development agenda of a region, but sometimes it boils down to the affected people themselves. There are a dozen other non-Ndebele regions underdeveloped in Zimbabwe, yet the focus remains on Bulawayo maybe purely for political reasons. During the era of Rhodesian governance, it was impossible to tell a development culture of a region using tribe as a prism of judgement. Why has this emerged after independence? Was the Rhodesia Front using a different resource allocation model from what the ruling Zanu PF party is using?
My answers are simple because perception often counts for everything and sooner or later becomes reality. What should we make of the perception in some circles and the belief in others that Gukurahundi was a first step towards ‘extermination’ which has been continued post its military phase by economic means both of which have been accompanied by large scale migration of human capital to South Africa and thereby reflecting the depth and magnitude of under development in the region?  Those who use ideological toothpicks to further analyse the ‘minority paradox’ will add that most public institutions, including in just about every little corner of the region  are ‘deliberately’ dominated by other groups other than those local to the region.
What compounds this problem answers my second point of national political leadership. There is no doubt in my mind that most or all political parties in Zimbabwe are of mixed ethnic complexion. We must have inherited this good character from the first nationalist structures! You will agree that even after the nationalists split in 1963, you still found all manner of linguistic and ethnic diversity in both ZAPU and ZANU (as it was then called) even though less so in ZANU.  However, the real gist of the matter lies post-independence. I am not going to argue whether or not Margaret Thatcher’s Conservative Party played a role in who was to become first Prime Minister of Zimbabwe, as is often argued in some circles, because that would be speculative. My point is this.  Why was it that Joshua Nkomo, even during the Unity Government period, was never perceived as likely to be ever the national president of Zimbabwe?
Things may look simpler in modern-day political dispensation, because most if not all political parties have a semblance of ethnic and tribal leadership balance. Yet if you follow arguments advanced by writers and analysts in most formal and social network media, one gets the impression that people from specific ethnic groups are not considered as capable of assuming positions of national leadership. Reading in between the history of the split in the nationalist movement of the 1960s, Joshua Nkomo seemed to have been blamed for not being militant enough in dealing with Ian Smith. Again after independence, his party was either blamed for being too close to Communists, or harboring ‘regime change’ agendas. When the MDC split in 2005, we were blamed variously  for ‘dividing the votes’,  being ‘power hungry’ and being “tribalists” without due regard to any of the facts, not even the causative facts.
The land reform policies are also associated with ‘taking land from the minority whites and giving it to majority blacks’. Indigenisation policy is known as a means of ‘transferring wealth from the white-controlled companies to the poor black majority’. Whenever my colleague, David Coltart, comments on any issue of national significance, he is accused of ‘suffering from white Rhodesian colonial hangover’.
If our country is to go forward and assume its mantle in the world of the enlightened and developed, Zimbabweans must begin to accept that tribe, language and race play a minor role in human, political and economic advancement. We cannot allow ourselves to be caught up in the archaic Penny Sparrow state of mind. Our capability must be judged according to quantifiable deliverables, rather than which village we come from.
Welshman Ncube is a professor of law and president of the MDC party.