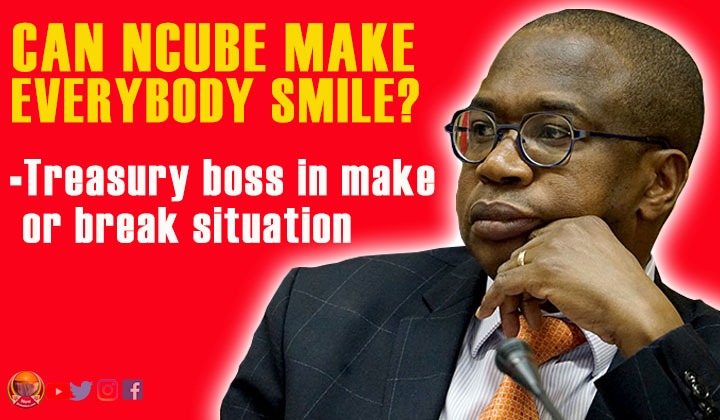 FINANCE Minister, Mthuli Ncube carries the hopes of a downhearted nation when he steps into parliament this Thursday afternoon to deliver his maiden 2019 budget statement.

The world renowned economist and non-politician, recently thrown at the deep end by President Emmerson Mnangagwa to clean up nearly two decades of economic mess, is aware of the task at hand.

Little however is expected of him in a constrained economy weighed down by heavy debt, high level corruption, political patronage and a monstrous appetite to spend on nearly everything by a giant bureaucracy.

Ncube has the entire nation keen to see how he hopes to tame government’s propensity to spend.

Mnangagwa has the top banker’s back, having been battling to convince the investor community that he has departed from his predecessor, Robert Mugabe’s profligacy.

Ncube is keen to play the much difficult balancing act with different sectors of the economy all crying out for a generous portion of the cake.

Business, which has been buffeted by foreign currency shortages and a turbulent pricing system, is looking at nothing less than a clear strategy to stabilise the market and bring certainty to the economy.

Captains of industry have told government to stop the unnecessary blame game after authorities have fingered the sector for the price chaos and shortages of basic goods.

Ncube is expected to set aside a budget to meet those expectations.

Similarly, Zimbabweans will be expecting a review of the hihly controversial 2 percent tax recently imposed by the treasury boss which they say was unnecessarily burdening them with extra liabilities when they were already failing to make ends meet with what they had.

Civil servants, whose are salaries have been eroded by recent price increases, also look forward to a wage review and to hear news about their 2018 bonus payouts.

Most Zimbabweans also want to see how the minister intends to tame government’s disproportionate wage bill that has seen civil servants’ pays gobble plus 80 percent of the national purse.

Ncube is also expected to bring clarity, short of harmonising the country’s three tier pricing system that has seen businesses charge different amounts depending on whether one is paying in US dollars, bond notes or electronic transfer.

Recently, Ncube introduced separate Foreign Currency Accounts which contradicted earlier pronouncements the bond note and RTGS balances were at par with the US dollar.

He also has to find answers to the country’s giant debt burden while careful not to further starve the nation.

Renowned economist, Prosper Chitambara predicted that the welfare sector is likely to be affected by these priorities.

“We once experienced a similar trend during the 1990s decade when government embraced the Economic Structural Adjustment Program which left the social services sectors like and health and education with inadequate funding and history is likely to repeat itself,” he said.

Economist John Robertson said focus must be directed towards dealing with the cash crisis and reducing the size of the civil service.

“This fiscal imbalance will complicate civil servants salary payments especially considering that Ncube has already made a commitment to settle the external debt with global financiers in the next 12 months,” he said.