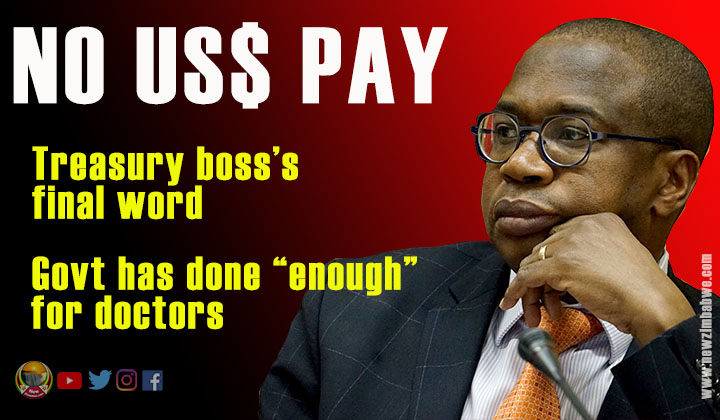 FINANCE Minister Mthuli Ncube has put-paid to any lingering hopes striking doctors may receive their wages in US dollars one day, declaring at a Monday briefing that government’s primary revenue sources were not in hard currency.

Ncube said this at a Harare media briefing while accepting a US$1 million cholera emergency grant availed by the African Development Bank Group (AFDB) on government’s behalf.

Junior doctors have gone on a 17 day strike action to demand, top among their grievances, payment in US dollars, constant availability of medicines and other paraphernalia to use in their day to day duties.

But the treasury boss buttressed the position with a Monday declaration no civil servant shall receive their wages in foreign currency, adding that government had done “enough” for the health professionals.

“Government cannot pay any civil servant hard currency because we are not earning any forex,” Ncube said.

“There is no question of us paying in foreign currency. I urge them (doctors) to accept what they are getting. Government can only pay in RTGS for now.

“I believe government has done enough to meet their demands. We are doing our part in responding to their demands. So, I urge the striking doctors to go back to work.

“People are dying in hospitals and they should provide the service.”

Ncube also dismissed any prospects of a salary hike for doctors, saying such action may create “complications” within the economy.

“Increments will create complications for the country but we will do our part to make sure their needs are met,” he said.

In demanding for US dollar wages, the doctors say their Real Time Gross Settlement wages have been eroded by a recent wave of price increases.

Teachers have, likewise, been demanding for a return to US dollar salaries while proffering the same reasons.