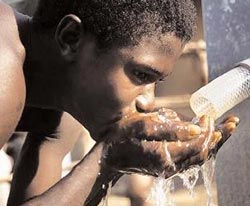 YEAR 2016 will probably rank as one of the worst periods for water and food situation in Zimbabwe. As the world ponders on how to mitigate and adapt to the devastating effects of climate change, Zimbabweans have to face the grim reality that this year will not have enough rain, surface and ground water. There are those who may claim that we were not warned, however, we politicians have known all along that Zimbabwe is a water vulnerable country. I cannot imagine what life is like in Mhandamabwe (Chivi) and Kezi right now, especially for the women and children who generally bear the full brunt of drought.
What is so strange is that when one flies over Zimbabwe – north from the Zambezi River down south to the Limpopo River, one sees a panoramic pattern of water bodies ‘floating’ below the wings of the airplane on the distant ground. This collaborates reports by Give A Dam Zimbabwe that our country is one of the most ‘dammed’ countries in Africa.  Without even talking about Osborne and Mutirikwi (Lake Kyle) dams, consider that Kariba Dam extends for 280 kilometres and has a storage capacity of 185 billion cubic metres of water and a surface area of 5,580km2.  If one adds the other two thousand or so small dams scattered in former commercial farms and ‘African Purchase Lands’, you want to tear your hair out why we Zimbabweans are starving in the first place. It must be to do with bad governance.
In 2013, we were brave enough to include in our national constitution section 77 that, “Every person has the right to
(a) safe, clean and portable water; and
(b) sufficient food; and the State must take reasonable legislative .. measures           within the limits of the resources available to it, to achieve the progressive realization of  this right.”
It is only a totally irresponsible and rogue government that can contemptuously ignore constitutional obligations because of misplaced partisan priorities.
As far back as 1985, the National Master Plan for Rural Water Supply and Sanitation was conjured and approved before the National Action Committee was established with the Ministry of Local Government Rural and Urban Development in the chair 1987. In 1999, the Water Act was promulgated leading to the establishment of Zimbabwe National Water Authority (ZINWA) which has bungled and blundered since then. We all remember the chaos this institution caused in urban centres and it is only now, in 2016, when it has dawned on government that ZINWA is better off commercialised and privatised.Advertisement

In 2015, on the global front, the United Nations re-configured MDGs to Sustainable Development Goals (SDGs) where article 6.4 boldly stated that “By 2030, substantially increase water-use efficiency across all sectors and ensure sustainable withdrawals and supply of freshwater to address water scarcity and substantially reduce the number of people suffering from water scarcity.” One hopes that by then we will all but have relegated Zanu PF in the annals of Zimbabwean history, because they have been mostly responsible for our water crisis.
For the people of Matabeleland North and Bulawayo, starvation has been further exacerbated by the inability of the Zanu PF government to fulfill their promise of the Zambezi Water Project. It was always going to be nothing but electoral hot air, considering the riparian implications thereto. “Riparian water rights is a system for allocating water among those who possess land along its path. Under the riparian principle, all landowners whose property adjoins a body of water have the right to make reasonable use of it as it flows through or over their property.” Thus if you consider that the Zambezi River – through the Zambezi River Water Authority – is partially ‘influenced’ by Botswana, Zambia, Zimbabwe and Mozambique, I do not understand how even Ian Smith would have pulled that pipe project from the magic hat of infrastructure development.
Millions of dollars have been spent in rural areas by NGOs attempting to fill the water delivery deficiency gap created by a dysfunctional Zanu PF water delivery system. Plan International, ADRA (Seventh Day Adventist Development Agency) and Dabane Trust are some of the familiar names in water delivery. I know that the USAID and GIZ (German International Agency) invest several millions of dollars in irrigation projects every year, but that can all go this far in alleviating Zimbabwe’s water woes. Consider that annual capital expenditure for water must be almost eight hundred million dollars most of which must come from public investment. In 2009, the African Ministers Council on Water (AMCOW) commissioned the production of a second round of Country Status Overviews (CSOs), Government of Zimbabwe and other stakeholders. The previous year we had heard the WHO/UNICEF Joint Monitoring Programme suggest that 82 percent of Zimbabweans had access to safe water, but I am not so sure now.
Zanu PF’s relentless plunder of commercial farms from 2000 and the rapid ‘displacement’ of villagers into resettlement areas messed up our country’s water management. Poor farming methods, vandalism and lack of capacity eliminated dry season irrigation programs and left us vulnerable to rain fed-agriculture. Add the effects of unscheduled power shortages and you will appreciate why we have no strategic grain reserves. We were warned about El Nino and the reduced rain potential; we knew in advance that at least two million Zimbabweans were vulnerable to droughts, but government focused more on political relevance than human food security.
If we do not take action now, by June this year we might have lost fifty percent of our domestic animal stock, not to mention millions of children staying out of rural schools and unplanned rural-to-urban migration. I have heard the government talk about mobilising two hundred million dollars for drought relief, but I see no actions towards investing in dams and irrigation technology. There must be a national program to repair and rehabilitate wells and boreholes. Rural district councils must be capacitated as communities and the private sector allowed to start own initiatives without prostrate submission to a dysfunctional ZINWA. Continued centralising of water management thwarts innovation and investment, thus government must shift from implementation to facilitation. Food security is inextricably linked with water delivery.