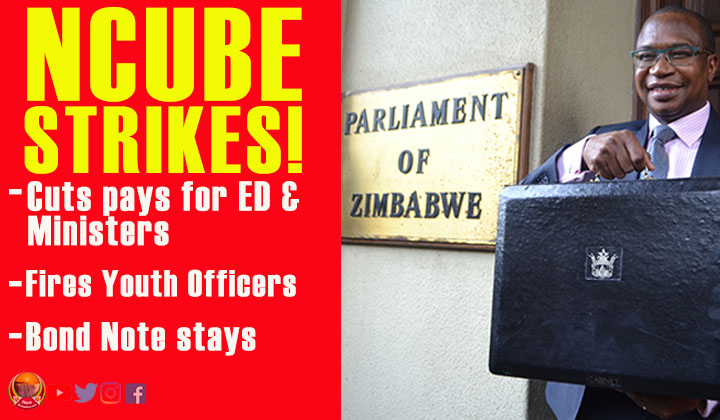 By Nkosana Dlamini and Alois Vinga

FINANCE Minister Mthuli Ncube Thursday proposed a US$8.2 billion budget for 2019 which sees the Education ministry getting the highest piece of the cake on a US$1,1 billion allocation.

Presenting his 2019 budget, themed Austerity for Prosperity, Ncube allocated US$547 million towards defence while the health ministry received US$695 million.

Ncube also kept bonus payments for civil servants which would be calculated based on basic salary only.

The treasury boss also revised the tax free threshold from the current US$300 to US$350 for 2019.

Ncube appeared to have ignored recent pay hike demands by civil servants who also suggested, in the alternative, to have their current wages paid in US dollars.

Among some of the talking points of Ncube’s budget is a decision to keep the much resented bond note in circulation while he imposed foreign currency duty on car imports citing the need to steer the country’s import expenditure pattern away from non-productive items.

Ncube said the country’s import bill has been dominated by a wide range of imports some of which are not critical to the economy.

He also pledged to reduce government’s wage bill that continues to gobble a giant portion of the national purse through mandatory retirements on all government workers above the age of 65.

The 2019 budget also saw the minister terminate contracts for 2 900 youth officers widely viewed as a Zanu PF patronage base that was haemorrhaging the economy at no economic value to the country.

Among the Minister’s most visible austerity measures in his 2019 budget were 5 percent pay cuts directed at the President, his deputies, ministers, top civil servants among them permanent secretaries and directors.

The minister also moved to reduce the number of the country’s foreign embassies in attempts to control expenditure on foreign missions in what has often seen ambassadors and their staff evicted for non-payment of rentals.

He also touched on the management of the government vehicle fleet to improve efficiency and make savings as some civil servants used government operational cars after hours, during weekends and on holidays for private errands.

Ncube said the cars should be parked at work stations or nearest police stations after designated working hours, adding that all government pool vehicles will now be managed through CMED.

In his budget statement, Ncube also projected a US$1.6 billion fiscal deficit for the coming year while also projecting a growth rate of 3.1 percent. The figure is slightly lower than the 2018 expected growth of 4 percent.

His US$8.2 billion is against a total request of US$15 billion from line ministries.

Of the total budget, US$2.1 billion is set for capital expenditure after much of the national purse in previous years has been gobbled by a giant government wage bill.

Among other highlights, inflationary pressures are predicted to stabilise while total revenue for 2019 is projected at US$6.6 billion to be drawn from tax revenue amounting to US$6.04 billion, non-tax revenues of US$162 million and retentions of US$400 million.

However, total expenditures for 2019 are projected at US$8.16 billion of which with employment costs taking up US$4.05 billion while government is expected to overspend by US$1.57 billion which is slightly lower than the 2018 over expenditure of US$2.7 billion.

The treasury boss announced that all the revenue collected by government departments will be deposited in a single account to avoid the risks of funds abuse while saying the payment of civil servants’ wages will fall directly under his purview.

“The primary objective of the 2019 budget is to stabilise the economy by targeting the fiscal and current account twin deficits which have become major sources of overall economic vulnerabilities including inflation, sharp rise in indebtedness, accumulation of arrears and foreign currency shortages,” Ncube said.