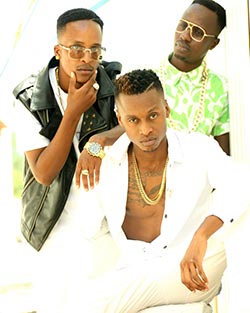 HIGH-FLYING Bulawayo based dance troupe’s Anti Virus Crew’ star continues to shine after the group was picked to perform at the National Merit Awards (NAMA) on Saturday.
The NAMAs will be held in Bulawayo for the second year on the trot.
Also on hand to thrill guests at the Bulawayo Rainbow Hotel are Sandra Ndebele and Intombi Zomqangala, Jah Prayzah and Bulawayo-born and South African based Jazz sensation, Dorothy Masuka.
In a telephone interview with NewZimbabwe.com, National Arts Council of Zimbabwe (NACZ) Marketing and Communications Officer, Catherine Mthombeni, confirmed the line up.
“I can confirm that Anti Virus Crew, Intombi Zomqangala, Jah Prayzah and Dorothy Masuka will perform at the awards,” said Mthombeni.
Contacted for a comment, a member of the dance trio could not hide his excitement of being part of the awards ceremony.
“We are really excited about performing at the awards ceremony. What we really want to do is give back the same way they gave us that opportunity, the equivalent of that and prove that they made the right decision.
“Since we are known for both music and dance, we want to give people a bit of both, something spectacular. We feel honoured to be on that stage because it has been a long time coming and this recognition makes us feel like the artists we are,” said Ricco.
Anti Virus Crew are currently riding high after releasing a musical video titled Pokello, which celebrates the achievement of Harare socialite and businesswoman Pokello Nare, who represented Zimbabwe in the Big Brother Africa reality show last year.
Bulawayo songstress, Sandra, said it was an honour for her to finally perform at the national awards.
“It’s really an honour for us to perform at NAMA. What we do on stage unites everyone, as you know I’m not only a Bulawayo girl but a Zimbabwean girl and my music is diverse.
“Obviously people will see different dance styles on Saturday, we are not only going to do Isitshikitsha but Kwaito, Sungura and a bit of Hip Hop to show that we are multi-cultured,” said Ndebele.
Harare-based Jah Prayzah is in line to win four awards on the night after he was nominated for the Outsatnding Musician, Outstanding Album, Outstanding Song and Outstanding Video awards.Advertisement

Should luck be on his side, he can also scoop the People’s Choice Award, an award voted for by fans.
His latest album Tsviriyo, released last year, has earned him a multitude of fans throughout the country and confirmed him as one of the upcoming musicians to watch for in the country.
No doubt, all the focus will be on Aunt Dot, as Dorothy Masuka is affectionately known in the jazz circles, who will make a guest appearance at the awards and is set to perform with a full band.
According to information from NACZ, the 13th edition of the awards ceremony will be broadcast live on ZTV.