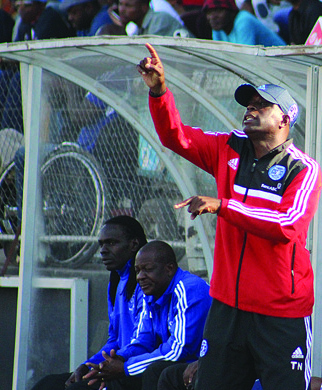 HOW Mine coach Luke Masomere has predicted an explosive afternoon when his side visit Dynamos at Rufaro in Sunday’s league match.
The Bulawayo side will be meeting a title-chasing Dynamos who failed to win last weekend when they were held 1-1 by Tsholotsho away.
Masomere said Dynamos’ failure to win last weekend is going to make their afternoon a tough one.
But he has tipped his charges to be equally competitive, throwing the match into a heated confrontation.
“I see fireworks on Sunday. It is going to be a real battle between two teams with very good players,” Masomere said.
“Dynamos are the reigning champions and want to defend the league title so they will throw everything at us. We are also trying to fight against relegation and we will give it a strong fight.
“I know Dynamos are a wounded lion after dropping points last weekend and we are also a bit wounded. This is a match that is going to excite everyone.”
Dynamos are four points behind leaders Chicken Inn.
How Mine midfielder and former Dynamos captain Tawanda Muparati will be returning to Rufaro to face his former employers.
Ndiraya rallies troops
MEANWHILE Dynamos coach Tonderai Ndiraya has challenged his players to jealously maintain their lengthy unbeaten run as they push to defend the league title for a fourth successive time.
Ndiraya’s charges last lost a league match in early May and have gone for 12 straight games without tasting defeat.
They are four points behind leaders Chicken Inn and on third place with the same number of points with Triangle who however edge them with a superior goal difference.
“I have been telling the players that we have not lost a match in a long time but that does not mean we have reached our season targets. The battle is still on and we have to maintain that,” Ndiraya said.
“It is crucial for us not to drop points but continue with this unbeaten run which we have to make sure is three points every match. It is however not a stroll in the park.
“It is something that comes with a lot of sweat. We hope to be the better side against How Mine in terms of goals. We are at home, which is an advantage to us.”
Dynamos will again miss injured captain Augustine Mbara as well as defender Ocean Mushure who was red-carded in their last match away at Tsholotsho.Advertisement