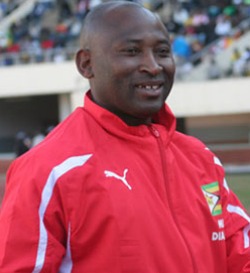 Malawi 1-1 Zimbabwe
ASSISTANT coach Peter Ndlovu has said he was pleased with the way the locally based Warriors performed in Saturday’s one-all international friendly match against Malawi at Kamuzu Stadium.
The Warriors came from behind to snatch a draw against the Flames – who had foreign-based players in their squad.
Ndlovu, who deputising first assistant Lloyd Mutasa in the absence of head coach Klaus-Dieter Pagels, was impressed with the way the players fought for a draw.
“We trained only for a day before the match but that negative aspect counted little,” he said.
“Most of the boys have not played together for a while, but their understanding of each other is amazing. It shows that we have a good squad capable of doing wonders.
Zimbabwe travelled to Malawi by road with a squad that had five new players from the one that played Zambia last month.
“This is a squad of local players, from where we will take maybe one or two players for our World Cup match at home to Egypt next month,” Ndlovu said.
“The match has been of great importance, because we will meet Malawi in July in the Cosafa Cup in Zambia. We now know better how Malawi play and I know they have also had the chance to see how our local players play.”
The Warriors were using the Malawi friendly to fine-tune a team to play against Egypt next month and in July’s Cosafa Cup as well as the Chan qualifiers.
Some players, though, will join the foreign-based contingent in the squad to face Egypt and Guinea in next month’s World Cup qualifiers.
Malawi were using Saturday’s game to prepare for their World Cup qualifiers against Kenya and Namibia.Advertisement