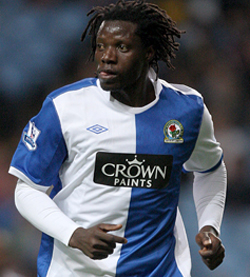 FORMER Warriors captains Peter Ndlovu and Benjani Mwaruwari will lead a cast of young Zimbabwean footballers set to feature in a high profile exhibition tie against Spanish giants FC Barcelona’s legends next weekend.
A 30 member delegation comprising 20 former Barca greats will fly into Harare 11 November for a match that shall stage at the National Sports Stadium a day after.
Former FIFA world cup winner Rivaldo Ferreira and Patrick Kluivert are among players coming.
The two world greats were in the country on two separate occasions this year with Kluivert also taken to President Robert Mugabe’s Gwanda youth interface rally.
At a press briefing in Harare on Thursday. Sports and Recreation Minister Makhosini Hlongwane said the international friendly shall serve as a major tourist attraction among outsiders enthused by the former stars of one of the world’s most popular football clubs.
“The visit to Zimbabwe by the Barcelona legends is set to create a pitched positive furore not only in Zimbabwe but beyond its borders internationally thereby drawing a possible large contingent of tourists to throng either Harare to catch a glimpse of the local and visiting football icons,” Hlongwane said.
He added: “This match conveniently dovetails government’s adoption of the community sport and recreation club system which envisages the realisation the realisation of the on-going initiative of establishing eight thousand soccer clubs across the country.
“Therefore, it is in this perspective that the match will ignite synergies of developing soccer in the country.”
Speaking at the same occasion, ex-Barcelona star Rayco Garcia, who flew into the country to put final touches to the match, said his former Barca colleagues were excited about their intended visit to Zimbabwe.
“Our players want to use the Barcelona brand to expose the name (Zimbabwe), the opportunities, that this is a wonderful land where people can come and visit and enjoy; it’s a land to invest,” he said.
“I think through this match, internationally, its going to help (people) have more information about Zimbabwe.”
ZIFA president Philip Chiyangwa said none of the footballers who shall feature in friendlies in Maseru (Lesotho) and Windhoek (Namibia) 8th and 11th November shall be part of the Harare exhibition encounter. The two friendlies will feature the cream of the country’s football team.Advertisement

Chiyangwa refused to disclose how much will be spent by the Zimbabwean government in organising a public relations match for President Mugabe’s condemned administration.
It is not the first time Zimbabwe has hosted world renowned footballers under similar circumstances.
In 2010, a Ricardo Kaka inspired Brazilian national team flew in to hand the Warriors a 3-0 defeat in a match the former world cup winners were using to prepare for the 2010 World Cup in South Africa.
President Mugabe’s government is at pains to clean up a battered image which recently suffered a setback when the veteran leader’s appointment by the World Health Organisation as the continent’s goodwill ambassador on NCDs was abruptly rescinded by the UN health agency following a global outcry over the accolade.
Previously, government has raided national coffers to pamper musical celebrities such as Jamaican reggae chanters Sizzla Kalonji and Luciano as well as American R&B crooner Joe Thomas.