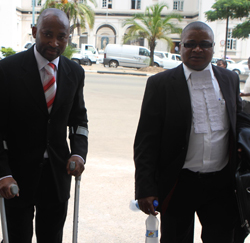 PETER Ndlovu’s trial for causing death by reckless driving failed to take off for a third time on Tuesday due to his lawyer’s unavailability.
The Victoria Falls Magistrates’ Court heard the former Zimbabwe captain’s lawyer, Harrison Nkomo, had been unable to get a flight from Harare.
The trial is now expected to start on Wednesday before magistrate Archibald Dingana.
Ndlovu, 39, of Lawrence Street in Parklands, Bulawayo, denies culpable homicide over a December 16 car accident near the Victoria Falls Airport which ended in the death of his brother, Adam, and a passenger, Nomqhele Tshili.
The trial had been slated for Tuesday after Nkomo missed another hearing on March 20.
The former Coventry City, Sheffield United and Mamelodi Sundowns striker was behind the wheel of his BMW X5 when he failed to negotiate a curve approaching the Victoria Falls Airport.
The car mowed down several trees before coming to a stop. Tshili died instantly while Adam died on his way to Victoria Falls Hospital.
Ndlovu is accused of failing to take proper control of the vehicle and failing to stop when an accident looked imminent resulting in the crash.
Victoria Falls area prosecutor Namatirai Ngwasha is appearing for the State.Advertisement