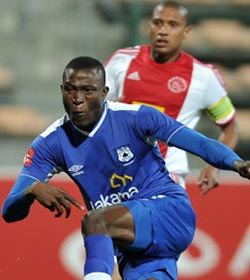 Ajax Cape Town 0-2 MP Black Aces
TENDAI Ndoro scored a brace as Mpumalanga Black Aces claimed a 2-0 victory over Ajax Cape Town in an Absa Premiership clash at Athlone Stadium in Cape Town on Friday night.
The result sees AmaZayoni surge up to sixth place on the log on 34 points, level with SuperSport United and AmaZulu. The Urban Warriors remain in 11th place on the standings with 28 points.
The visitors started the game on the perfect note when Zimbabwean striker Tendai Ndoro provided a clinical finish as early as the second minute to put his side 1-0 up.
After the shock of conceding an early goal, Ajax gradually worked themselves back into the game and looked dangerous on attack, though it was Aces who nearly scored again just past the 30 minute mark when Abia Nale’s shot was pushed away for a corner kick by Anssi Jaakkola.
The hosts continued to look dangerous on attack, but it was Aces creating the better chances. Jaakkola was forced into another good save just before the break, keeping out an Onyekachi Okonkwo effort with his legs.
The Urban Warriors goalkeeper came up with another good save just before the hour mark, keeping out an angled drive from Ndoro, while Ajax substitute Simba Sithole was unlucky to see a glancing header skim off the crossbar with 15 minutes to play.
In the 78th minute Aces made sure of the three points, as Ndoro scored from a tap-in after the away side caught Ajax Cape Town on a counter attack
TEAMS
Ajax: Jaakkola, Lolo, Isaacs, Hlatshwayo, Jenniker, Mzwakali (Alexander 72’), Mobara (Losper 55’), Scott, Dolly, Morris, Rodgers (Sithole 55’)
Aces: Mabokgwane, Mabaso, Mabizela, Mwanjali, Ngalo, Timm (Tukane 80’), Qalinge, Zwane, Okonkwo (Zuke 63’), Nale, Ndoro