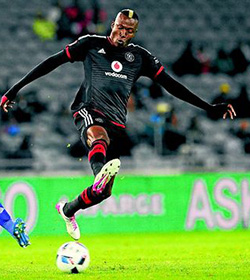 Orlando Pirates 3-1 Golden Arrows
SOUTH Africa: Tendai Ndoro scored the first hat-trick of the 2016/17 Absa Premiership to inspire Orlando Pirates to a 3-1 win over Golden Arrows at Orlando Stadium in Soweto on Wednesday night.
The Zimbabwean was virtually anonymous in the first half but came to life after the break, scoring three goals in the space of 27 second-half minutes to see the Buccaneers to victory in their first official match under Muhsin Ertugral.
Pirates were the first to threaten a goal, with Oupa Manyisa latching onto a rebound from a free kick to fire a long-range shot which forced Arrows goalkeeper Max Mbaeva into a fine save as early as the fourth minute.
Arrows created a great chance to open the scoring in the 21st minute when striker Lerato Lamola went on a great run down the left flank, but his attempt to pick out Kuda Mahachi at the unguarded far post was too strong.
Mahachi, Lamola and Nduduzo Sibiya formed a potent, mobile attacking trio that threatened again and again to split open the Buccaneers’ defence. The home side were often left flat footed at the back against the pace of their visitors.
One such example arrived in the 35th minute when Wayde Jooste sprinted clear from the right channel, but from a tight angle he was unable to test goalkeeper Felipe Ovono and only found the side netting.
The final highlight before the break saw Pirates striker Bernard Morrison almost score a Beckham-esque lob from just inside Arrows’ half: the Ghanaian attacker spotted Mbaeva off his line but his long-range effort drifted just over the crossbar.
Pirates made a tactical change at the start of the second half, sending on Thabo Qalinge in place of Morrison, but it was their other winger, Thabo Rakhale ,who opened up Arrows’ defence in the 49th minute to help Tendai Ndoro break the deadlock.
Rakhale enjoyed a clever exchange of passes with Mpho Makola down the right before squaring for Ndoro, who provided a neat finish past Mbaeva to make it 1-0 to the Buccaneers.
Pirates’ lead lasted just 12 minutes, with Arrows hitting back just after the hour mark. Felipe Ovono spilled a tame low cross from the left flank and Mahachi hit the post from the loose ball – the chance appeared to be gone, but Sibiya reacted quickest to the rebound to score with a low shot.Advertisement