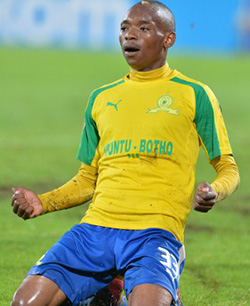 TEN-MAN Black Aces powered to a 3-1 win over AmaZulu in an Absa Premiership match at the Princess Magogo Stadium in Durban on Saturday evening.
Goals from Tendai Ndoro, S’boniso Gumede and Eddie Ngalo saw Aces take the three points despite playing just over a quarter of the game with 10 men following the dismissal of their goalkeeper.
For Usuthu, the result is a major let-down after they claimed their first win of the league season against University of Pretoria in midweek, and the failure to build momentum will be a bitter disappointment to coach Steve Barker.
AmaZulu had the first shot in anger, with Tshepo Liphoko getting an effort on target in the fifth minute, but Aces goalkeeper Jackson Mabokgwane made a comfortable save.
The teams went on to trade chances throughout the first half, with strikers Bornwell Mwape and Bongani Ndulula looking dangerous for the home side, while Black Aces’ Tendai Ndoro and Collins Mbesuma were a genuine threat.
In fact, Ndoro was the man who opened the scoring just before halftime. The Zimbabwean striker scored direct from a free kick to put the visitors ahead.
Shortly after the restart it was 2-0 to AmaZayoni, as defender S’boniso Gumede headed home from an Onyekachi Okonkwo corner kick.
AmaZulu reacted by shifting their formation, sending on Ayanda Dlamini and Carlington Nyadombo from the bench.
The former made an almost immediate impact, setting up his namesake Goodman Dlamini to score past Mabokgwane and reduce the deficit to 2-1 in the 55th minute.
However, on the hour mark, Aces restored their two-goal lead. Eddie Ngalo got on the end of Aubrey Ngoma’s corner kick and headed home the visitors’ third goal.
The match took yet another twist five minutes later when Aces goalkeeper Mabokgwane received a second yellow card for time wasting and was sent off for an early shower.
With a numerical advantage, AmaZulu dominated the remainder of the match, but they were unable to find a way through Aces’ defence and substitute goalkeeper Energy Murambadoro.