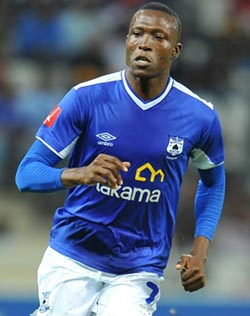 ZIMBABWE international striker Tendai Ndoro appears to have finally found his feet at Mpumalanga Black Aces after scoring a brace at the weekend, taking his goal tally in the league to five goals.
The former Chicken Inn forward had a slow start this term, having had an explosive debut when he joined Amaziyoni midway through the season last year, and went on to score seven goals, just three shy of eventual Golden Boot winner Bernard Parker.
And naturally expectations were high for him this season. However, he has not made the ideal start, and before last weekend, had managed just three goals in 15 appearances for his club.
But a brace on Saturday as Aces came from two goals down to force a 2-2 draw, brought him back in contention for the Golden Boot Award this season.
With five goals, Ndoro is the highest Zimbabwean scorer in the Premiership, alongside Mamelodi Sundowns’ Cuthbert Malajila. Both are two goals behind the early pacesetter.
Khama Billiat is third in the ranking order as his equaliser for Mamelodi Sundowns in the 1-1 draw against Pretoria University on Saturday was his fourth of the season.
This was Billiat’s fourth successive goal, and if he maintains this rich vein of form, he would easily run away with the Leslie Manyathela Golden Boot award.
The speedy winger had a false start to the season due to an injury and has played in just eight games this season.