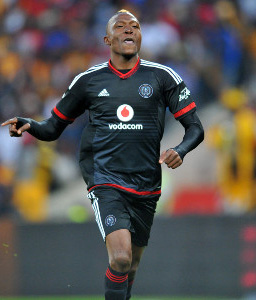 AN early goal from Tendai Ndoro secured a 1-0 win for Orlando Pirates over Free State Stars in an Absa Premiership clash at Orlando Stadium on Saturday evening.
The Buccaneers extending their unbeaten run at home against Stars – the Free State side haven’t beaten the Buccaneers away from home for over two decades.
Three points takes Pirates up to sixth and within touching distance of the top four with six games remaining. Kaizer Chiefs, who play in the week, are but four points ahead of their Soweto rivals.
The fans were treated to an action packed start to the game with Ndoro taking no time to open the scoring. The Zimbabwe forward has been in hot form and having been put straight through on goal by Mpho Makola, he hammered his shot into the corner of the net with nine minutes on the clock.
Ndoro came within inches of completing his brace two minutes later. Luvoyo Memela burst forward before slipping in his teammate, who’s left-footed effort cannoned off the woodwork.
The Buccaneers were all over Ea Lla Koto in the opening exchanges with the visitors riding their luck: Johnny Mathole with a superb save to deny teammate ,Bokang Thlone, from guiding the ball into the back of his own in the 18th minute.
Moeketsi Sekola provided a moments respite with his header forcing Brighton Mhlongo into an acrobatic save, but Pirates were quick to reassert their dominance.
Following a swift counter-attack Makola played in Thabo Matlaba – the Pirates captain had time in the penalty area – but could only succeed in working the post.
Free State Stars lucky to be only a goal down at the break with Eric Tinkler’s men ruing several missed opportunities as they gathered in the change room.
Having been treated to a pulsating first-half, the crowd witnessed a rather dull second stanza with Stars quick to close down Pirates. The visitors were a much better side and Mhlongo had to be at his best to keep out Danny Venter’s bullet in the 76th minute.
Goal-scoring chances were few and far between in the closing stages with Pirates holding on for all three points – the home side exacting revenge for their 1-0 defeat to Stars, earlier this season.