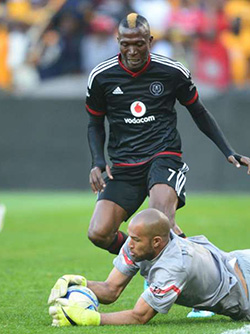 ZIMBABWE international striker Tendai Ndoro could finally feature for Orlando Pirates in the Caf Confederation Cup after impressing in the Carling Black Label final against Kaizer Chiefs last Saturday.
The forward, the Golden Boot winner with Chicken Inn in Zimbabwe two seasons ago, scored the winning penalty for Bucs in his first Soweto Derby before 94 000 fans at the FNB Stadium.
“It was a good feeling since (Friday) in camp. I wanted to play this game. Always watching this game on TV [in the past], I said one day I will play in this and today, thank God, I’m part of the Derby,” he said.
And Pirates coach Eric Tinkler says he may be forced to register Ndoro, signed from Mpumalanga Black Aces last month, following injuries to fellow forwards Thamsanqa Gabuza and Kermit Erasmus.
Bucs will host Tunisia’s CS Sfaxien on Saturday at Orlando Stadium, with Lehlohonolo Majoro the only recognised striker currently available for duty in the continental competition.
“I have left that space open because it now makes us think exactly how long a period these players are going to be out. That’s the first question we need to ask,” Tinkler says.
“Then, obviously, if they are going to be out for a long time we need to consider that [registering Ndoro].”
Ndoro replaced Gabuza in the first half against Chiefs, and Tinkler was pleased with his performance though he missed a couple of chances before slotting the winning penalty in the shoot-out.
“The game was a great opportunity to see the likes of Tendai playing in the Derby in front of 95,000 fans, his first Derby ever. To see Luvuyo Memela, to see how he copes playing in this type of pressure.
“That bodes well for them come when the League starts because it makes me well aware their capacity, both physically and psychologically.
“I’m very happy with those players who came in and contributed to the game.”Advertisement