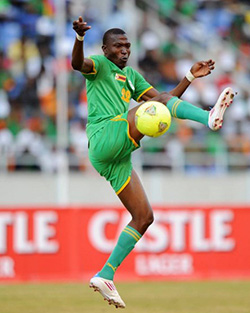 CHICKEN Inn striker Tendai Ndoro will only move to Mpumalanga Black Aces in January after the two clubs failed to close the deal by September 2, the cut-off date for the South African transfer window.
Aces had confirmed Ndoro’s capture and are believed to have applied for a work permit, but ZIFA declined to issue a transfer clearance, a spokesman confirmed on Wednesday.
ZIFA Communications manager Xolisani Gwesela said in a statement: “ZIFA would like to inform the football fraternity that all transfers and registration of players are processed within the transfer window period.
“This is in adherence to Annex 3.1 of FIFA regulations which governs the transfer and registration of players and it states that ‘all applications to register a professional must be submitted by the new club to the new association during one of the registration periods established by that Association’.
“Consequently, the transfer of player, Tendai Ndoro, was not processed because South Africa Football Association (SAFA)’s transfer window period had closed on September 2, 2013. Chicken Inn FC entered the transfer instruction into the Transfer Matching System (TMS) on September 13, 2013.
“We would like the football fraternity to kindly note that the player, Tendai Ndoro, can only be transferred to Mpumalanga Black Aces FC during the second SAFA transfer window period which opens on January 1, 2014, and closes on January 31, 2014.”
Ndoro was Zimbabwe’s leading goal scorer before he left for South Africa having netted 12 goals in 16 starts.
The latest setback could see him return to Chicken Inn for the remainder of the season.Advertisement