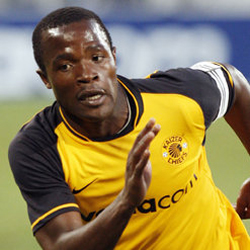 FORMER Kaizer Chiefs and Bidvest Wits midfielder Tinashe Nengomasha is itching to play for Zimbabwe champions Dynamos.
The veteran defender told the South African media that he would love to wind down his career at Dynamos if he fails to secure a contract with a South African club next month.
The 32 year old said he grew up supporting Dynamos and would love to play for them again.
“Dynamos is the team I grew up supporting and l intend finishing my career there,” he said.
Better known as the “General”, Nengomasha played 261 games between 2002 and 2012 for Chiefs.
He was named the player of the year and players’ player of the year the following season after guiding Amakhosi to the league title.
The player signed a two-year deal at Wits with the option of another year, but the club has decided not to exercise that option.
Dynamos have been welcoming back players who return from abroad with such players like Rodreck Mutuma (Bloemfontein Celtic), Tafadzwa Rusike (Ajax Cape Town), Simba Sithole (Mamelodi Sundowns and SuperSport United), Oscar Machapa (Moroka Swallows) and Takesure Chinyama (Legia Warsaw), having all returned to play for the club.Advertisement