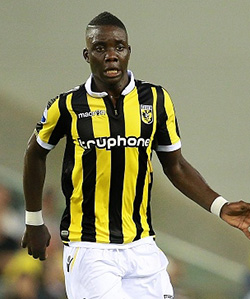 VITESSE midfielder Marvelous Nakamba is relishing more game time with the Warriors, after being handed his first start and home debut by coach Callisto Pasuwa in Easter Monday’s 2017 Afcon qualifier 4-0 demolition of Swaziland at the National Sports Stadium.
Having previously turned out for the national Under-17 and 20s, Monday’s match was Nakamba’s second Warriors cap after he came on as a substitute in the 2-1 win over Malawi last June.
But Nakamba was overlooked when Zimbabwe hosted Guinea in September last year before he sat out the entire match on the bench on Good Friday in Swaziland.
Nakamba has been a sensation in the Dutch Eredivisie where he is considered as one of the best playmakers in the league.

Pasuwa’s little regard on Nakamba drew widespread criticism and the 21-year-old proved his worth with a sublime display when he was thrown into the fray in his home debut.
“I am very happy to have started for the Warriors for the first time.
“I want this to happen more often in the games to come,” Nakamba said.
He added: “I knew my chance would come and I just had to be patient.
“I am happy with the way I played but I know I can do far much more if given more chances. I was coming from an injury that saw me missing three games for Vitesse so I was not that fit.
“I promise more in the upcoming games for the Warriors.”
Nakamba was in the same junior international teams as Knowledge Musona and Khama Billiat.Advertisement