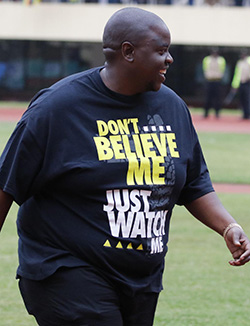 MOBILE telephone company Net One has agreed to sponsor the Warriors’ 2017 African Cup of Nations campaign and future commitments, in a major development in the local game which has been crying out for a corporate sponsor.
Zifa has been struggling to tie down a corporate sponsor to fund their activities including sponsorship for the Warriors.
Even the previous Zifa board led by Cuthbert Dube failed to secure a corporate sponsor with the then president often financing activities from his own pocket, including payment of salaries for the secretariat.
And the new Philip Chiyangwa’s board has also faced the same challenges with Harare businessman Wicknell Chivayo funding the Warriors activities, including paying national soccer team coach Kalisto Pasuwa’s salary.
However, he Chivayo faced also challenges and has for the past six months failed to pay the national team coach’s salary.
Chiyangwa then has used his strong links in business to secure a corporate sponsor. The sponsorship will be unveiled in Harare on Wednesday.
Net One officials however, refused to divulge details of the sponsorship preferring to keep it a secret until the official unveiling.
The Warriors who are in the same group with African football giants Algeria, Senegal and Tunisia will make the trip to Abidjan, Ivory Coast for a preparatory friendly match ahead of the finals to be held in Gabon in January.
Pasuwa’s men will then wind up their campaign with a warm up game against the Indomitable Lions of Cameroon on January 10.Advertisement