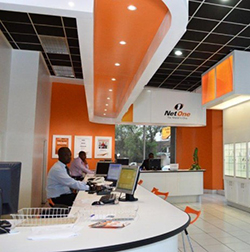 THE country’s second largest mobile phone company NetOne has posted a $5,8 million loss in the six months to June 2015 compared to a $7,5 million profit in June last year.
Management cited the cost of investments required under the Zimbabwe Agenda for Sustainable Socio-Economic Transformation (ZimAsset) blueprint.
The telco, wholly-owned by the government, said its capital investment in the half year was $5,59 million and showed an increase of over 66 percent compared with the previous period.
“The company will continue to invest in capital projects in order to improve on market efficiencies,” NetOne said in a statement accompanying its financial results.
Revenue in the period under review increased by 14 percent to $57,8 million while earnings before interest, taxes, depreciation and amortisation was $10,39 million compared to $9,6 million registered last year.
“The introduction of the five percent excise duty in the fourth quarter of 2014, the tariff reduction of 35 percent in January 2015 and the introduction of customs duty on mobile devices all worked to suppress the revenue generating capacity of the company,” said NetOne.
“Despite these setbacks, the company grew in terms of subscriber numbers and top line revenue.”
The mobile telco’s customer base increased by 28 percent from 2,771,420 in June last year to 3,556,688 in June 2015, making it the second largest after Econet which has 9,5 million subscribers. Telecel Zimbabwe has 3,4 million subscribers according to latest figures from the Postal and Regulatory Authority of Zimbabwe.
In the period under review, NetOne embarked on a massive upgrade of its infrastructure, courtesy of a $218 million loan from the Chinese government as part of the ZimAsset programme, which gives it the platform to grow its subscriber base to eight million.
“This upgrade and the National Mobile Broadband  (NMBB) will give NetOne the capacity to grow its user base to over eight million subscribers, with an ability to quickly ramp this up, should the need arise,” the company said.Advertisement