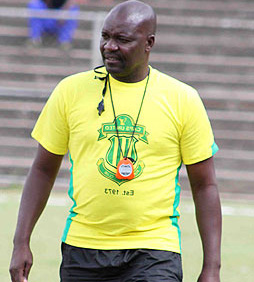 CASTLE Lager Premier Soccer League debutantes Tsholotsho FC kick off their campaign in the top light on Friday afternoon when they clash with an revamped Harare City at Rufaro Stadium in Harare.
Having travelled a long journey from the Southern Region Division Three league three years to winning the sole promotion ticket last season, coach Lizwe Sweswe believes they will throw up some surprises.
“This team has been together for almost three years and will certainly be no pushovers in the league and any team that underestimates them will lose,” said Sweswe, a warning to City and other rivals.
Some of the players in the squad include captain Nkosilathi Moyo, Proud Sibanda and Kudzanai Machazane, who was formerly on the books of Highlanders.
Affectionately known as “Iziqholo ZeZhwane”, the first team from rural Matabeleland North province to play in the premiership, unveiled their squad for the season on Tuesday.
They will use an all-white kit for home matches and all black in away matches.
Home matches will be played at White City Stadium in Bulawayo, 115km from their base.
The venue underwent extensive renovations last year in preparation for the Africa Union Sports Council (AUSC) Region Five Games staged last December.
But on Friday, Tsholotsho are likely to get a baptism of fire from a well-sponsored Harare City, who don’t only have a new coach but a number of new players.
Coach Taurai Mangwiro was respectfully cautious of his opponents.
“We are taking Tsholotsho just like any other team in the league. It would be dangerous for us to underrate them,” Mangwiro said.
“The fact that they play in the top-flight league speaks volumes itself. They are in this league to compete against the best.
“That is why I have so much respect for them and I have been telling my players not to underestimate our opponents.”
Mangwiro arrived from Caps United alongside players like veteran goalkeeper Tafadzwa Dube and Tendai Samanja in addition to other stars like Osborne Mukuradare, Nathan Ziwini, veteran skipper David Kutyauripo, Martin Vengesayi and Max Nyamupanedengu.
FIXTURES
Friday: Harare City v Tsholotsho FC (Rufaro Stadium)
Saturday: FC Platinum v Dongo Sawmills (Mandava Stadium), Chicken Inn v Flame Lily (Luveve Stadium), Dynamos v Buffaloes (NSS), ZPC Kariba v Highlanders (Gwanzura Stadium)Advertisement