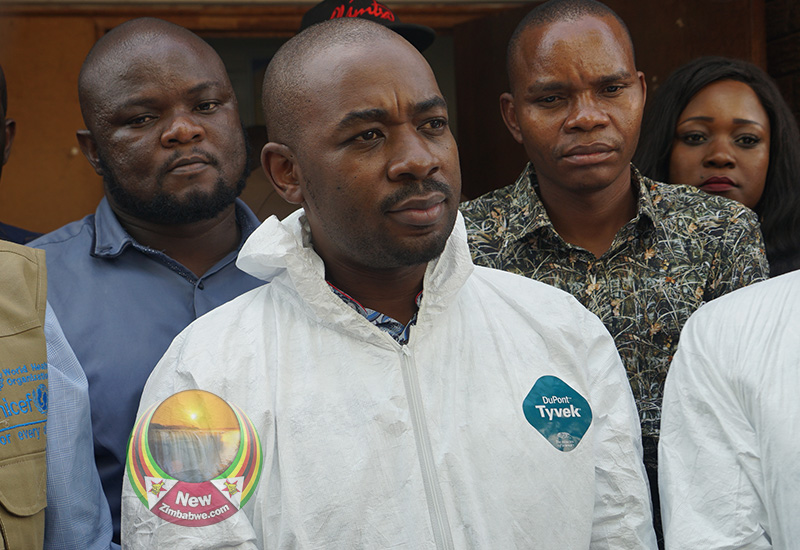 Covid-19 became the latest battleground between the government and the opposition yesterday as the virus reached Zimbabwe.

The opposition MDC Alliance announced two cases in Harare, ostensibly bringing the national total to three. But several hours later, the health ministry said only one new case had been added to the first, announced on Friday.

The minister of health & childcare, Obadiah Moyo, said the second case involved a 30-year-old man who returned from New York via Johannesburg on March 9.

“He started exhibiting mild flu-like symptoms on March 12 which progressively got worse on March 19,” said Moyo, adding that the man was a patient at Sally Mugabe Hospital in Harare.

Zimbabwe on Friday reported its first coronavirus case, a man who returned to his home in the tourist resort town of Victoria Falls from Britain at …

Chamisa told the Sunday Times: “The virus was detected in a facility run by the city council and it is in the best interest of the public to know, so yes, we had to announce.”

Harare mayor Herbert Gomba said the council had reported the cases to the government. “We are well within our rights to tell the public and we did so after we had informed the government,” he said.

The permanent secretary in the ministry of health & childcare, Agnes Mahomva, said Covid-19 cases should only be announced by the government, because the tests were performed by the National Health Laboratory Services.

“If there’s no statement from us then there’s no issue because we do the tests and then send the specimen confirmation to the National Institute for Communicable Diseases in SA,” she said.

On Friday, the government announced the country’s first case, a man from Victoria Falls who had visited Manchester in the UK. The man notified his doctor when he began experiencing symptoms, said Moyo.

“After arrival he put himself on self-quarantine at home as per our advice to all travellers coming from Covid-19-affected countries. On realising that he was not feeling too well, he contacted his doctor by telephone, advising him that he had a persistent cough and sneezing.”

Civil society broadly welcomed the measures, but some said they would also curb political activity such as protest rallies.

The Zimbabwe Human Rights NGO Forum welcomed the restrictions on large gatherings. But “enforcement of such restrictions must be done within the confines of the constitution, fully respecting fundamental rights and freedoms of those affected”, it said in a statement.

In Harare, the entertainment industry is the hardest hit and show promoters and restaurant owners are counting their losses.

Farai Mubi Schmidt, owner of ArtiSana Gallery Café, said business was already tough because of the economy but Covid-19 would effectively kill it.

“Considering that the operating environment was already challenging, it will be difficult to survive this period,” said Schmidt.

Harare had been set to host one of Africa’s top artists at the Easter weekend, Nigerian rapper Burna Boy. Because of the ban on large gatherings, the show’s organisers are battling to get another date or refund those who had already bought tickets.

“Investments had been made, tickets were bought, it’s a huge loss in income. Service providers and staff who depend on these events will struggle,” said show promoter Elton Kurima.

But some nightclubs across the country are determined not to close. Instead, they said they would try to ensure no more than 100 people were on the premises at any one time and would step up hygiene measures.

The ban on big crowds is heartbreaking for Kudzanayi Mahachi and his bride-to-be, who were meant to walk down the aisle next weekend. They had invited 300 guests, but have had to cut the number to less than 100. They also had to describe the event as a “mini gathering”, since weddings are banned.

“The biggest expense was the venue, which cost us the equivalent of US$1,200,” Mahachi said.

“We can’t get a refund on that. Now we have to do a court wedding followed by a small gathering of only family and friends, which is not normal in our culture. Additional expenses like hand sanitisers for the guests have now cropped up.”

In Victoria Falls, the tourism industry has reported an 80% drop in business due to the pandemic and is retrenching staff. Some companies are cutting salaries by up to half.

The chair of the Hotels Association of Zimbabwe, Arnold Musonza, told the Sunday Times that hoteliers expected that nine out of 10 reservations would be cancelled.

“Our cancellations lined up for the year are close to 80% and we may get even a higher percentage by next week as many airlines have cancelled their flights,” Musonza said.

“We don’t know what will happen because if the airlines also stop flying and neighbours close borders all around us, we foresee no guests, and that’s a big blow.”

As of Friday, SAA and Ethiopian Airlines were the only carriers flying into Zimbabwe.

Musonza said the government should come up with a bailout plan because tourism is a major foreign currency earner and the industry is of national importance.

The rainforest on the Zambezi, usually a tourist magnet, is all but deserted. “You can find no-one at the rainforest for hours. It’s that bad,” said Zimbabwe Parks and Wildlife Management Authority spokesperson Tinashe Farawo.

Critics of the government say the over-stretched health sector will struggle to cope with the pandemic.