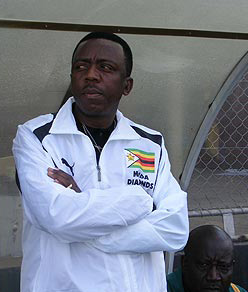 NEW Chicken Inn coach Rahman Gumbo, has admitted that he faces a challenging task of restoring confidence in his team which has hit a poor patch of form.
Chicken Inn have been defeated in their last three games, which were preceded by a draw against How Mine following a fair two-game win start to the season.
Gumbo will make his maiden appearance on the Chicken Inn bench on Sunday, when his side visit Mutare City who two weeks ago humbled how Mine at Sakubva Stadium.
But the championship winning coach will be under watch if he would be able to motivate his players to bounce back to winning ways.
“From the games that I have watched so far you will realise that the boys have been struggling with endurance. They have been struggling last the full match and have been conceding goals in the dying stages of the matches,” Gumbo said.
“We have to work on that aspect of endurance as soon as possible. If we manage to work on endurance then there is another task of working on the boys’ confidence.
“The last three defeats have had a negative effect on the players and they have to start believing in themselves again.
“It is going to be a huge task in trying to have them think positively back to how they were last season but we will get there.”
Gumbo expressed the dire need to boost his squad with new acquisitions during the mid-season transfer window.
He said he is much aware that Chicken Inn might lose some players to foreign clubs during that period.
Captain Danny Phiri, forwards Mitchell Katsvairo and Edmore Corambadare as well as Tafadzwa Kutinyu and Moses Demera are said to be on the radar of some South African clubs