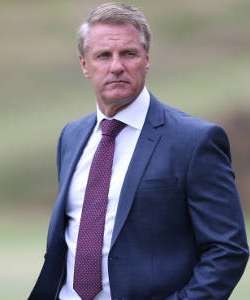 NEW CAPS United coach Mark Harrison says he has some catching up to do after missing three weeks of the club’s pre-season preparations.
The former Stoke City goalkeeper, finally arrived in the country at the weekend after he was granted a work permit.
Harrison was appointed the new Caps United coach on January 7 but returned to South Africa where he was coaching first division side Black Leopards.
The English gaffer had been waiting for his work permit while in South Africa in line with immigration rules.
However, the delay in processing of the work permit had started to worry the Caps United hierarchy whose patience was running out.
The 54 year old coach however, jetted into the country at the weekend and got down to serious business on Monday at RBZ Sports club – Caps United’s training ground.
“I have missed three weeks of training, so I have a lot of catching up to do. I need to have a look at the playing personnel we have and see what we can come up with,” said the Englishman.
However, full-back Ronald Pfumbidzai and Steven Makatuka were not training with the rest of the team amid reports that they had some knocks.
The Caps coach is expected to finalise on the squad to be submitted to the Premier Soccer League (PSL) for registration this week.
The team has been under the guidance of assistant coaches Brenna Msiska and Fungai Kwashi in their pre-season preparations in the past three weeks.
There was a high turn-out of players trying their luck at the Harare giants including former Shabanie Mine goalkeeper Victor Twaliki, former striker Leonard Tsipa, centreback Charles Mutero.
Also trying their luck were the likes of Harare City trio of Arnold Chaka, Witness Nyamutsaka and Tongai Chiworeso, former Shabanie Mine forward Carlos Mesi and Scholar Hadebe who was at Chiredzi FC last term.Advertisement