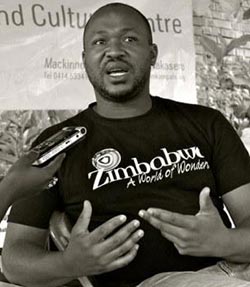 A NEW stand-up comedy club has been set up in Harare, as the genre’s popularity continues to grow in Zimbabwe.
The Other Comedy Club, the brainchild of Comedy Inc, was due to be opened on Wednesday with some of the leading comedians performing on the night.
Comedy Inc, is a new company that has been created to manage comedy clubs in general in Zimbabwe by creating comedy nights and administer the process of having more comedy and comedians in the country.
In an interview with NewZimbabwe.com one of the brains behind the new venture, Carl Joshua Ncube said they responded to the need to grow the trade and establish a permanent home of comedy.
“Our inspiration was growth, we just want to grow comedy in Zimbabwe. The more comedy nights we have the more comedians we can grow. This type of comedy night is what we call a comedy workshop, it’s a way of building new material and growing content,” said Ncube.
Ncube, a National Arts Merit Award winning comedian (NAMA) and one of the leading comedians in the country, said the name was inspired by the need to create a distinct comedy brand.
“That Other comedy Club is an expression people normally use when referring to a comedy night. We just wanted to create something fun that would generate the right kind of interest besides you know me and naming stuff I just want to have a bit of fun with my brands,” he said.
Some of the comedians who will perform at the opening night include Carl Joshua Ncube, Q The Boss and veteran rib cracker Michael K.
While comedy shows have been hosted in various places in Harare, Ncube said the addition of a new venue will broaden opportunities for comedians to earn an honest living and also professionalise the trade.
“It’s just another comedy night in Harare it means we can now attract comedians from abroad because we now have a comedy circuit to work from. Also for new comedians we have the opportunity to give them more work making comedy a full time profession,” said Ncube.
“Basically the comedy night will have 3 comedians on the bill and allow them to produce new material by performing all their new stuff for the first time at this club. Other comedians can come and do open mic as well just to grow comedians.”Advertisement

Stand-up has literally taken the country by storm with the emergence of hilarious comedians who have left thousands of comedy fans in stitches.
Some of the comedians who have emerged include Comrade Fatso, Doc Vikela, Simba the Comic King, Clive Chigubu, Ntando Van Moyo and Long John.
They have rescued the genre which was dying a natural death after the deaths of veteran comedians like Safirio Madzikatire and Philip Gadzikwa Mushangwe popularly known as Paraffin.
In the 1990’s the likes of Lazarus Boora, Omkhula and Freddy “Kapfupi” Manjalima were very popular.
The genre has also received a huge boost after the National Arts Council of Zimbabwe, created a category to honour the best comedian.