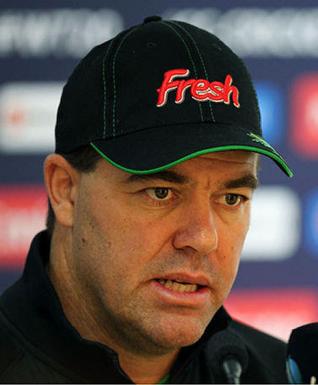 “MY promise is I will leave no stone unturned in terms of our endeavour and our quest to improve the team’s performances,” Zimbabwe’s new cricket head coach has said.
He added: “I believe that we have the resources here in Zimbabwe to do just that and planning is obviously going to be a major factor.”
Zimbabwe Cricket (ZC) have named former captain Heath Streak as the new national team head coach on Tuesday.
He was unveiled by ZC chairman Tavengwa Mukuhlani at a press briefing in Bulawayo after accepting a two-year contract.
The 42-year-old Streak, who has filled in the post left vacant following Davenell Whatmore’s departure in May, hailed his appointment as a ‘great honour’.
“Firstly I would like to say a big thank you to the chairman of Zimbabwe Cricket and his board for this opportunity,” said Streak, whose coaching career has so far included stints as Matabeleland Tuskers head coach, Zimbabwe bowling coach and Bangladesh bowling coach.
“For me, having captained this country, to be offered the post of head coach is a great honour and I know with it comes responsibility not just to the players but to the fans and supporters of Zimbabwe cricket as well.”
While one of Streak’s major tasks will be to help Zimbabwe qualify for the 2019 ICC Cricket World Cup, his immediate assignment is the upcoming two-match Test series at home to Sri Lanka, followed by a one-day international tri-series involving West Indies.
“We do have a lack of cricket but I know ZC is addressing that issue at the moment. I feel that with the upcoming series and the latter half of next year we have some really good cricket coming up so we can really work towards improving.”
Streak believes Zimbabwe has a bright future and hopes to make the team a force to reckon with in international cricket.
“I do see a strong future. Obviously things don’t just happen overnight. It’s a process but I know that process can happen quickly and for me that will be a big goal to facilitate that,” he said.