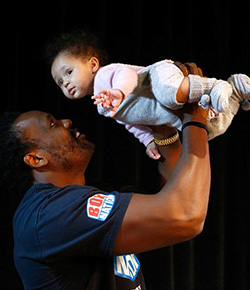 HEAVYWEIGHT boxer Dereck Chisora found you can’t always get what you want as Mick Jagger turned down the chance to be godfather to his daughter.
Chisora claimed that his new-born child Angeline Viola was named after the Rolling Stones song Angie, and he asked Jagger to assume the role.
But the Stones frontman didn’t take him up on the offer.
“We named her after my mum, my other half’s mum and the Stones song Angie,” said Chisora. “I tried to get Jagger to be godfather but he turned me down.”
However, despite having failed to get Jagger on board, Chisora is confident he will get plenty of satisfaction when he returns to the ring later this month.
He fights Tyson Fury in London on November 29, and has claimed the fight “will be one of the easiest of my career”.
Fury won the first time the two British fighters met in July 2011, but Chisora, who has recovered from a hand injury which saw the fight delayed in July, believes he will avenge that defeat this time around.
Meanwhile Fury has been warned he won’t get away with fighting dirty.
Chisora’s trainer Don Charles believes Fury got away with ‘dirtiness’ in that July 2011 fight, and has pleaded with Marcus McDonnell, the third man in the ring later this month, to ensure there is no repeat.
“When this fight was announced, all I said to Frank (Warren), ‘Get us a fair referee, a referee who’s not gonna allow any nonsense that Tyson brings’”, said Charles.
“Because he (Fury) brings a lot of dirtiness into his game. We will box fair, we will fight fair. A referee who’s going to be fair is all we ask.
“The first fight Dereck had with Tyson Fury I was going to put in a complaint. He won, but he was allowed to get away with a lot of nonsense.
“In the rules meeting I will insist that the referee does his job professionally.”
Charles also revealed he had seen positive changes in Chisora since he became a father, and is also pleased he has a daughter instead of a son.
He said: “I’m so glad he had a girl. The difference – everyone of us has got it inside us. Let’s say he’s a hard man. The girl will bring out the softness.
“The daughter, daddy’s girl, and trust me – every morning before every session, the first thing he does when he comes to the gym, he will do his hands, and then he will bring his phone, and say, ‘Have you seen what my daughter did last night?’Advertisement

“That shows us this is a guy who is truly taken by that little girl. It’s one of the hardest sports in the world. You’re putting your life on the line every time you go in the ring.
“So you need something that’s totally removed from what you do. When he looks at the girl every morning it gives him that extra motivation.”