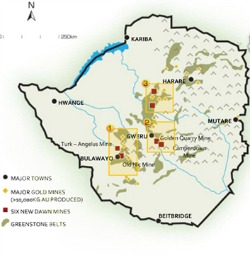 CANADA based gold miner New Dawn Mining on Thursday said it has produced 2% more gold from its five mines quarter-on-quarter in the first quarter ended March 31.
The junior produced 9,253 oz in the period, of which 8 612 oz was attributable to New Dawn, after adjusting for the minority interests’ share of gold production.
When compared with production of the first quarter 2012, this was a 5.9% improvement.
Consolidated gold sales for the quarter totalled $14.98-million, compared with $14.85-million in the same quarter a year earlier and $16.61-million in the previous quarter.
The average sales price was $1 608/oz of gold, which was lower than the corresponding quarter a year earlier, and was mainly to blame for working against the improved production to raise revenue.
New Dawn said as at the end of March, 1,927 oz of gold awaited export documentation for sale in South Africa, and would be included in April’s sales.
The company was early in the quarter impacted by an illegal and unprotected work stoppage at its Dalny mine, which ended following a ‘disposal order’ being issued in the Labour Court of Zimbabwe.Advertisement