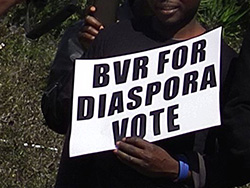 THE Constitutional Court (ConCourt) will, next Wednesday, hear an application filed by three Zimbabweans challenging provisions of the Electoral Act which, they argue, restrict the rights of citizens.
The sections, according to court papers, “prevent Zimbabwean citizens living outside the country from participating in the country’s electoral processes.”
In a notice of hearing, the Registrar of the Constitutional Court advised that the full bench of the ConCourt will hear the application on February 14.
The setting down of the hearing follows the granting of an order by Chief Justice Luke Malaba, last month giving allowing the three Zimbabweans living outside the country to petition the court.
In their application which was filed by Zimbabwe Lawyers for Human Rights (ZLHR) and the Southern Africa Litigation Centre (SALC), one Shumba and two other applicants are seeking an order to compel to facilitate the amendment of the Electoral Act (Chapter 2:13) and put appropriate measures so as to enable Zimbabweans living and working abroad to participate in the country’s electoral processes.
The respondents include the Minister of Justice, Legal and Parliamentary Affairs (Ziyambi Ziyambi) and the Zimbabwe Electoral Commission (ZEC) among others.
ZLHR and SALC are arguing that the residency requirements imposed under the Electoral Act are unconstitutional and that the new Constitution, which provides for political rights, allows “for every citizen of Zimbabwe to participate in political processes, wherever they are.”
The applicants further argue that the restrictive sections of the election law “disenfranchises some Zimbabweans based on their physical positions” adding these must be struck off the country’s statutes.Advertisement