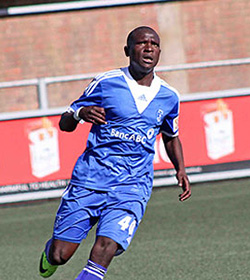 NEW Dynamos coach David Mandigora has admitted will be tough to hold on to some key players next season without Champions League football.
The league champions are not playing in Africa’s biggest inter-club competition due to lack of finances but have set themselves a target for a return in 2016 if they win next season’s title.
Some of the key players angling for moves include Ronald Chitiyo, who has been offered a two year deal in South Africa by Royal Eagles, Simba Sithole as well as the likes of Thomas Magorimbo, Temba Ndhlovu, Rodreck Mutuma and Tafadzwa Rusike.
Mutuma is also set for trials in South Africa after a failed stint with Bloemfontein Celtic while Devon Chafa has been lined up for trials in Turkey, according to his manager Gibson Mahachi.
“The Champions League is key for Dynamos and players have always been attracted by that. We are not playing next season and, as such, some of the players could look for moves,” Mandigora said on Thursday.
“Some of the players use the Champions League to get moves abroad and, for now, quite a number already have their contracts running out.
“We need to talk to them before the year ends and get a good squad that will win the league and play in the Champions League in 2016.”
The coach has been told to get 30 points in the opening half of the Premiership to stand a chance of winning the league title.