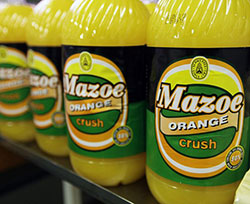 BEVERAGES manufacturer Schweppes Zimbabwe says its volumes are set to treble this year following the acquisition of new machinery, an official said rcently.
The general manager finance, Asere Shumba told the parliamentary committee on indigenisation and empowerment that output of its popular brands, Mazoe and Minute Maid, had doubled to 6,8 million cases in the four years to 2013 and will treble by the end of the current year.
“In terms of growth, the company has more than doubled output during that period. We expect that by 2014 the volumes will almost treble,” Shumba said.
He said the company’s after tax profit had also grown to $3,6 million in 2012 from $1,9 million in 2009, but declined to $3,2 million last year.
Shumba said borrowings to finance capital expenditure had declined to $12,1 million last year from $17,5 million in 2011 as the company is generating enough revenue to service its debt following the acquisition of new machinery two years ago at a cost of $15 million.
“The machinery that was bought has a lifespan of about 20 years and has worked for about two and a half years but the debt is almost repaid.
“So we are going to have another 15 years where the cash that was going towards the banks will become available for shareholders and other purposes,” he said.
The company has spent $26,9 million on capital expenditure since 2010.
Earlier this year Schweppes acquired Beitbridge Juicing, which has capacity to process 40,000 tonnes of oranges annually at a cost of $10 million.
“What we have at the moment is a very solid business going forward,” he said.
The number of employees has also grown in the last five years from 549 to 810, he added.
Schweppes is owed 49 percent by beverage giant, Delta Beverages and 51 percent by employees through a special vehicle, Whaterton Investments.Advertisement