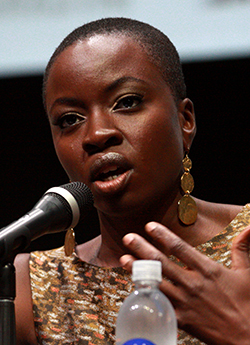 FOR her latest work, actress and playwright Danai Gurira draws on her experiences living on both sides of the Atlantic to delve into the intergenerational dramas of a family split between two cultures.
The world premiere of “Familiar” opens Thursday night at the Yale Repertory Theatre in New Haven, Connecticut.
The play centers on a first-generation Zimbabwean-American family and zooms into the most comic and dramatic moments of a demographic not often portrayed on stage.
Gurira emphasized her desire to focus the play on a people that rarely receives attention from the theater world.
“Why have we never really looked at an African family in America?” Gurira said. “The more my fascination grows, the more I feel I must tell that story.”
The play follows a young Zimbabwe-American woman named Nyasha, who travels home to Minnesota for her sister Tendikayi’s wedding.
Tendikayi has chosen to partake in a traditional Zimbabwe wedding ritual with her fiancé, which unravels a host of family secrets and latent tensions between sisters and parents alike.
Gurira herself is Zimbabwean-American and has lived in both countries throughout her life. She said a large motivation for the play’s storyline was her own experience as an African immigrant.
“There are threads in the play that are definitely things I’ve somewhat experienced and witnessed,” Gurira said.
Gurira also highlighted the universality of the immigrant experience, noting that the disputes between parents and children over cultural conflicts is an experience that is shared by many immigrant communities.
Kimberly Scott DRA ’87 — who plays Annie, the aunt who comes from Zimbabwe to conduct the traditional wedding ritual — agreed that the family conflict explored in “Familiar” speaks to a theme that many have experienced.
“The strength of the play is the fact that everybody has some sense of recognition,” Scott said, adding that the play deals with the universal question of resolving one’s own identity.
James Bundy DRA ’95, the dean of the Yale School of Drama and the artistic director of the Rep, said the themes of the immigrant experience in America are frequently depicted on stage today because of their immediacy in an increasingly global society.
Gurira added that writing about a Zimbabwean family was important for her because of the strictly Western lens through which Americans typically view Africa, explaining that the Zimbabwean wedding ritual in the play teases out the cultural tension.Advertisement

She explained that the juxtaposition between dramatic moments and moments of unexpected comedy — such as when the groom’s brother flirts with the bride’s sister — is meant to honestly depict rather than simplify the experience of a group not often portrayed in theater.
“It’s important for me to show all aspects of the human experience, especially when you’re representing underrepresented people,” Gurira said.
Performances of “Familiar” will run through Feb. 21.