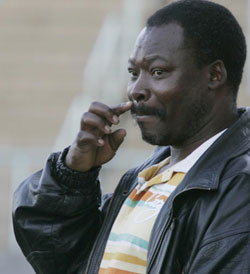 MOSES Chunga appears to be slowly transforming Harare City’s league fortunes but, the nomadic coach is refusing to bask into his bright start after just two games in charge.
The capital city club beat Bulawayo City 2-0 on Saturday, to record a second successive victory.
Francesco Zekumbawire and Martin Vengesai scored to help City, follow up on the previous weekend’s win over Ngezi Platinum in Chunga’s first game as coach.
The two wins have lifted Harare City from 10th position on the log to sixth.
Chunga took over when the team had managed just two wins, three draws and as many defeats under his predecessor Taurai Mangwiro.
They now trail leaders Caps United by six points, positioning themselves on a realistic position for the league title.
But Chunga is keeping his head low despite a show or improvement in just two games.
“There is some work in progress and we are yet to reach the position we want to be at. We are still working on improving ourselves,” Chunga said.
“Last week I said we want to build up on the win over Ngezi and we managed to to just that. We now want to build on this win against Bulawayo City.
“There is still a lot of work to be done to achieve that. Two wins is fine for us so far but that is not enough.”
City’s flawless run under Chunga will get a stern test when that meet Dynamos in their next game.