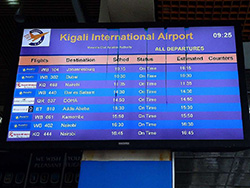 RWANDAN national carrier RwandAir will introduce a four times weekly service between Kigali and Harare staring on Wednesday, Zimbabwe’s Civil Aviation Authority (CAAZ) said Tuesday.
This follows the airline’s announcement in January this year that Harare will be among six new African and international destinations it planned to start servicing in 2017.
The flights also commence after Zimbabwe’s tourism minister Walter Mzembi met RwandAir officials in Kigali on the sidelines of an African Union summit last year and discussed the possibility of the airline servicing the Kigali-Lusaka-Harare route.
The two sides also explored the possibility of RwandAir doing the Harare-Kigali-Guangzhou, as well as the Harare-Kigali-London routes in the future.
Plans by RwandAir to launch Harare flights had been on the cards for some years. RwandAir operates one of the youngest fleet on the African continent and flies to over 20 destinations across Africa.
Zimbabwe has in recent years witnessed increased interest from various airlines that are keen to fly into the country.
Several airlines have also expressed interest to commence direct flights to the recently upgraded Victoria Falls International Airport.
Last month, Ethiopian Airways was the first to introduce direct flights to Victoria Falls Airport while South African Airways replaced its 138-seat A325 with a wide-bodied 222-seat Airbus A330-200 as the airport can now accommodate bigger aircraft.
Kenya Airways has also announced that it will start direct flights between Nairobi and Victoria Falls on May 1, making it Kenya Airways 52nd destination and its second city in Zimbabwe after Harare where it operates 21 flights weekly.
The Victoria Falls International Airport, which was commissioned in November 2016, is poised to attract increased air traffic after it underwent a facelift which increased its passenger handling capacity to 1.5 million per year from 500,000.
The project was carried out by a Chinese contractor and financed through a 150-million dollars loan from China Export-Import Bank.Advertisement