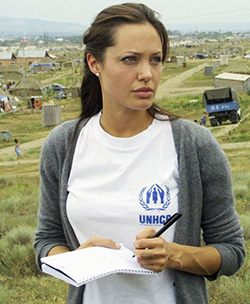 AN Ethiopian woman whose terrifying ordeal of kidnap and rape at the hands of her would-be husband inspired Angelina Jolie’s new film Difret says she hopes her story will help end the tradition of child bride abductions.
Difret, which is released in the United States on Friday, tells the story of Aberash Bekele who was put on trial for murder at the age of 14 after shooting dead her abductor in a case which sent shockwaves through Ethiopia.
Bekele, who spent many years in exile after the trial, said she was inspired to speak out by Malala, the Nobel prize-winning girls’ rights campaigner.
Actress and rights campaigner Jolie, Difret’s executive producer, said the film “shows how the courage of brave individuals can awaken the conscience of a society”.
Bekele was abducted by horsemen as she walked home from school in southern Ethiopia in 1996. She was taken to a hut where she was raped by a much older farmer in a bid to force her into marriage – a practise known as telefa in Ethiopia.
“I knew I had to fight back and escape the first chance I got,” she told the Thomson Reuters Foundation in an email interview on Friday.
She seized her opportunity when her kidnapper left his gun leaning against the wall and the door unlocked.
“My father had taught me how to fire a gun, so I took it and ran. When he and his friends chased me, I shot him. It was the most terrifying, horrible ordeal of my entire life – and I’m one of the lucky ones,” she said.
On trial
Bekele was arrested and put in prison, but her case attracted the attention of Ethiopian lawyer Meaza Ashenafi, who had recently founded the Ethiopian Women Lawyers Association.
The two-year trial prompted the first open discussions on telefa and eventually led to a change in the law.
In the past a man who abducted and raped a girl could escape criminal charges if he agreed to marry her. Today a man who abducts a minor faces up to 15 years in prison.
Although Bekele was acquitted on the grounds of self-defence, she was not able to return home because village elders decreed she should be exiled.
She spent several years in an orphanage in Addis Ababa before moving to Dubai to work as a maid. Advertisement

The film’s Ethiopian director, Zeresenay Berhane Mehari, says he tried to contact Bekele many times while making the film but to no avail – the lead character goes by the name Hirut.
“In the past, I chose to live my life hidden,” Bekele said. “But now, with the film I have decided to take a more public role and teach about this issue. I was very inspired by Malala.”
Earlier this year she launched a petition urging the U.S. government to implement a comprehensive strategy to end child marriage and to direct U.S. foreign aid to programmes in countries where it is prevalent.
Across Ethiopia, 41 percent of girls are married off as children, 16 percent of them before their 15th birthday.
Campaign group Girls Not Brides says child marriage deprives girls of education and opportunities, jeopardises their health and increases the risks of exploitation, sexual violence, domestic abuse and death in childbirth.
Bekele, who is setting up her own foundation to focus on ending telefa and child marriage says she wants “to give voice to the screams of unheard rural women and girls”.
She mentions her own older sister, an Ethiopian marathon runner, whose dreams were killed off when she was kidnapped at 16.
Despite the change in law, bride abductions are still rife. In some southern areas one in six girls is abducted into marriage, and one in 20 in parts of the north, according to government data.
The film’s title has a double meaning in Ethiopia’s Amharic language; it usually means ‘to dare’, but can also refer to rape, the director said.
Difret, which won the audience awards at the Sundance and Berlin film festivals last year, has already been shown in Ethiopia. Bekele says it was well received and sold out for six weeks, but has not been shown in rural areas yet.