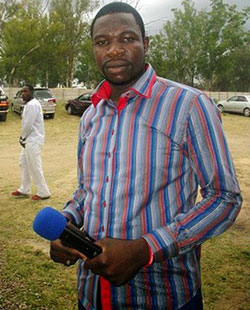 AT this rate, the Prophetic Healing and Deliverance Ministries of Prophet Walter Magaya will be the Church of Celebrity Deliverance after his fresh recruitment of artiste Daiton Somanje of the Tsaona fame.
But that is not the problem which has raised eyebrows over the new famous name to enter the Magaya ‘shrine’; far from it.
Questions have now been raised of the genuine nature of the ‘conversions’ which seem to come hand-in-hand with a relationship with poverty for many of the artistes involved.
Magaya exorcised popular pole dancer Beverly ‘Bev’ Sibanda’s thirst to sit on bottles, gyrate over her clientele and gibe lap dances that have left her crowds stunned and stiff – literally.
And yet quicker than anyone could repeat a Madagascan surname, the ‘convert’ had ‘reconverted’ to her old ways and back to her dance demons leaving the angelic robes Magaya had sewn for her in the media but not the money she had made from her stint in the church.
Since then many others have flocked to the church after seeing the changing fortunes of the artistes that have joined the popular Pentecostal clergyman.
“Fact is, we are there to make a bit of a turnaround of our fortunes,” said a ‘B’ rate celebrity who is a part of the emigration to PHD Ministries.
“It’s not like I am lying to God but it helps to have a family in the church which supports sales once you release an album or a single,” said the artiste.
The mass conversions have seemingly re-enforced that view that the church has just become another place where commercial activity has been taken in what is seen as a win-win situation.
The artistes get a ready base to sell their music and products while the prophet gets the big names and attracts more followers to his church with evidence that it is attracting people who otherwise would not have wanted to enter the gates of any church.
“We know that there is that perception of the church but away from the glitzy news the conversions by artistes is making, there are genuine day-to-day stories of ordinary men and women who are being assisted by the work of the prophet and that is what we should focus on,” said Reginald Hove from PHD Ministries who says the church he fellowships with has genuinely changed lives.
Daiton, having failed to eclipse his bad-boy brother Josphat, has hit hard times with his son Faheem accusing him of bewitching the family with additional woes coming from waning fortunes and health complications that have seen him struggle to work.Advertisement

Added to that he has been accused of philandering, leaving his wife and making off with a city tart.
As a result he has become a pauper and suddenly found God in a church where Holy anointing oil brings fortunes and heals the infirm.
The golden question is whether, should he find fortune and great health, Daiton will not run out of the church with Mammon tucked under his armpit as Bev ran off right back into the ‘gates of hell’ to redeem her demons and her dancing shoes.
Other artistes to make the ‘great trek’ include Allan Chimbetu, Alishias Maskiri Musimbe, Nicholas Zakaria, amongst a host of other musical Galacticos.