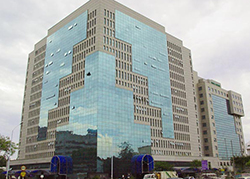 The National Social Security Authority (NSSA) has appointed Elizabeth Chitiga as general manager, replacing long-time chief executive James Matiza, who was fired last October.
It also appointed senior managers to replace four directors, who were dismissed alongside Matiza.
NSSA chairman Robin Vela told a press conference that the new team will strengthen its efforts to refocus its mandate as part of the restructuring exercise.
In addition to Chitiga, NSSA also appointed Emmerson Mungwari as Chief Finance and Operations Officer; Herbert Hungwe, Chief Investment Officer; Chikuni Mutiswa as Chief Strategic Assets Officer and Kura Chihota to the post of Chief Property Investment Officer.
The three who were already in the NSSA structures include Henry Chikova who is now Chief Social Security Officer after a stint as acting general manager, Barnabas Matongera the Chief Contributions, Collections and Compliance Officer and Betty Nyereyegona who is Chief Occupational, Health and Safety and Rehabilitation Centre Officer.
“They have diverse experience in high level management and will provide necessary leadership to drive NSSA’s transformation,” said Vela.
He said the contracts are three-year performance based with a probation period.
Vela said NSSA has since started to re-look at its investment policies and the detailed work required the presence of new management which is now in place.
On Monday, it reported a 68 percent decline in full-year profit for 2015 after a $93 million asset write-down relating to its Celestial office park in Harare and an ill-fated Beitbridge hotel project.
There have been concerns that the state run pension fund overpaid for the Borrowdale office park, while construction costs for the Beitbridge hotel vaulted from $17 million when the tender was floated to $49 million upon completion in 2014.
“We have now scheduled to take a strategic time out as management team and board for a month and we will try to dissect all our operations and re-look at all aspects to ensure that what remains key will be service delivery to pensioners.
“Within the investments, will split them into three and look at property, as a separate area headed by Chihota, Money market investments, will be looked at through the Chief Investments Officer Hungwe,” he said.Advertisement

On the other hand, Vela said the board has started to-relook at a transaction it intended to capitalise Zimre Holdings.
“We were concerned with the ZIMRE capitalisation, we started the process in in terms of re-looking at recapitalisation and it’s a process that happened prior to the appointment of this board.
“We are now winding down and we have not put finality on it but we are looking to see if it does have merit to continue to haggle over it or draw a line and look at other NSSA’s line of business,” he said.