THE new Marriage Bill has been finally gazetted effectively becoming a new law in Zimbabwe after it was signed by President Emmerson Mnangagwa in May this year.

The Bill, gazetted last week, puts all marriage laws under one umbrella, thereby making it possible to transform a registered customary union into a civil marriage.

Among other things, it gives power to traditional leaders, who can now solemnise marriages making it localised for everyone intending to register their marriage of choice.

All marriages in Zimbabwe now have a single register of marriages maintained by a single Registrar of Marriages.

The new Act has, however, been received with mixed emotions with the majority complaining that it promotes promiscuity.

However, some feel it is a blessing for those women who spend a lifetime with a male lovers, but fail to benefit from their estate when he dies, or leaves, simply because he was married to another woman.

“This is a progressive Act as much as people complain about it, it is a good law,” said a top Harare lawyer, Paida Saurombe.

“The law does not promote promiscuity, but protects individuals in situations or relationships which are polygamous, or those commonly known as ‘Small Houses’ who get dispossessed when the man in the relationship dies and don’t get anything while the main wife gets everything,” said Saurombe.

“There are situations when a married man leaves his wife to stay with his Small House, builds a family with them, gathers wealth with them, but when the man dies, such third parties are never recognised but victimised by their spouses relatives. So this law is protecting them, which is fair,” said the prominent lawyer.

“Promiscutiy has always been there so people cannot hide behind the new law. Instead, they should work on their morals. 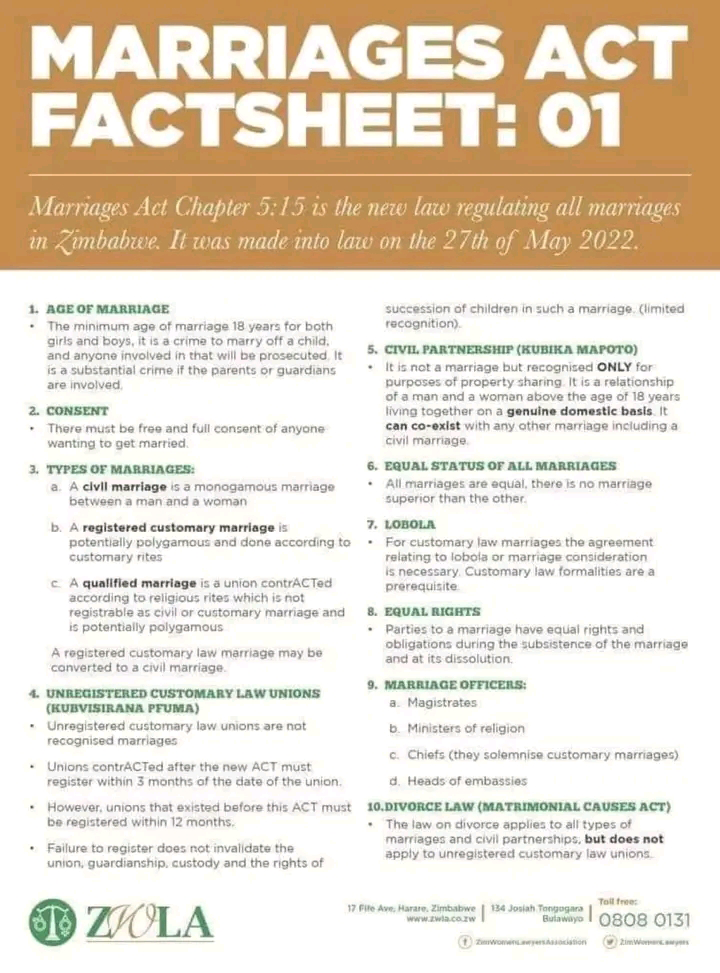 “I don’t see a reason why a third party should be punished, and anyway, adultery damages are still in place so one can pursue that if they feel that they have been treated unfairly.

“My advice would be that one should not commit to a civil marriage when they want polygamous union so you only have to choose wisely,” he said.

“The new Bill is good because it gives us an opportunity to educate women that they are equal partners in marriage and cannot be disposed of what they have worked for,” said Saurombe.

Another top lawyer, who preferred anonymity, said the Act destroys the marriage institution.

“The new Marriages Act has both medium term and long-term effects on society and marriages in particular. Firstly, my observations are as follows: It sets aside or weakens the threat of the law of bigamy, which prohibits a man or a woman married under the civil law to marry another man or woman.

“Its not clear what this law means by creating space for men to have multiple relationships that are recognised even though the law prohibits them.

“The previous Marriages Act protected the institution of marriage by punishing multiple relationships with adultery against the other party and bigamy in the case of the men. Now this means the adultery law will be weakened as well since those warnings are now recognised by the law.”

The lawyer said women married originally to men under the civil law will now be unprotected because their husbands can marry again because the law allowed it.

“This law will promote and protect adultery and the so-called Small Houses will benefit more than the first wife who should be protected. Effectively the civil law marriage is now polygamous. This exposes women more than it protects them and it is a breeding ground for fights in courts by women fighting over their husbands’ properties since both will be recognised.

There is civil partnership where a couple informally settles on a genuine domestic basis but without any marriage whatsoever.

Under these settings, the new law makes it clear that any property or assets acquired during the partnership will be distributed in the same way that property is distributed when a married couple divorces using the same law.

Those in unregistered customary marriages now have to be registered within three months of the creation of the union if the couple does not wish to go through the solemnisation process before a magistrate or chief. This is, however, not mandatory.